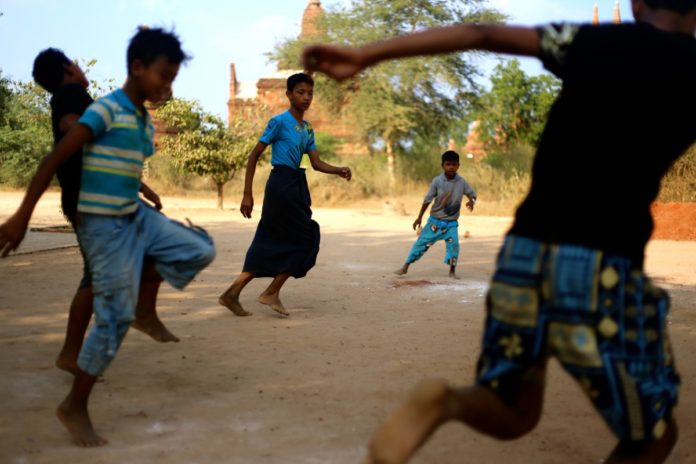 Democratic reforms in Myanmar appear to have ground to a halt as the government of Aung San Suu Kyi continues to disappoint.

It provides one of the very few positive stories coming out of the government in Nay Pyi Taw, which came to office on a wave of enthusiasm last April.

There are still no reliable figures on how many children are serving among the estimated 500,000-strong armed forces. The ethnic-minority rebel armies, which when combined reportedly outnumber government forces, are also accused of forced child recruitment.

The military or Tatmadaw claims to have freed almost 850 children since signing a pact with the United Nations in 2012.

“It is much more difficult to recruit a child today than it was four years ago,” said Bertrand Bainvel, representative for Unicef, the UN children’s agency, in Myanmar.

But military recruiters still reportedly scour public spaces like parks and stations looking for vulnerable boys they can coerce into signing up.

Many child soldiers are apparently deployed by the government in conflict zones, such as sprawling Kachin and Shan states.

Unicef said it had been trying to negotiate with the powerful rebel armies but no children had been freed.

It is a low bar to set for a supposedly democratic nation to demand that it does not enslave its children to fight in bitter, protracted insurgencies. The limited progress on the issue highlights the lack of positive stories for the National League for Democracy (NLD) government, which came to power in April 2016.

The country remains in the grip of its military, which commits atrocities and then investigates the allegations itself.

Rather than living up to expectations, State Counsellor Suu Kyi now performs the undignified role of cheerleader for the military, refusing to acknowledge its well-documented crimes and ignoring the same foreign journalists she used to receive at her Yangon home.

So confident is the military about its grip on the feeble, cowed domestic media that its press release about the Crimean excursion mentioned the Russian vessels’ dimensions to the nearest 10 centimetres but not a word about the illegal 2014 invasion of Ukraine that secured the territory.

While the international community condemns the invasion, the most powerful figure in Myanmar tours the peninsula, endorses its annexation by Moscow and then issues a press release describing it as part of Russia.

Any journalists who offend the thin-skinned Tatmadaw find themselves incarcerated during lengthy trials, often facing the notorious Section 66(d) of the Telecommunications Act. Any citizen can use Section 66(d) to sue for alleged online abuse, regardless of whether they were the subject of the remarks. It carries a threat of three years in prison and suspects are normally refused bail, which is deeply controversial for alleged defamation, meaning it is often used to jail journalists and political activists during prolonged trials.

The fact that the law is still used to lock up journalists and force the others to self-censor shows how little impact the NLD has had.

Under the military-drafted 2008 Constitution, the Tatmadaw has control of the Ministry of Home Affairs, which allows it to manage the judiciary and police.

The result is a democratically elected government in name only which is getting nothing done.

Evidence of this came in April when each ministry held a press conference to promote its “achievements” after a year in office.

For its special anniversary press conference, Minister for Labour, Immigration and Population Thein Swe praised the e-visa system for tourists, which was introduced under former president Thein Sein’s administration.

Ironically, the press conference was held at the Ministry of Information, which is itself a legacy of decades of military censorship and has no place in a genuine democracy.

Meanwhile, Zaw Htay, the director-general of the State Counsellors’ Office of Suu Kyi, chose to celebrate a modest peace fund of Ks14 billion (US$10.2 million) without mentioning how it might be spent.

The farcical inquiry of the butchery of Rohingya Muslims in Rakhine State confirms the military’s continuing grip on government.

Military-appointed Vice President Myint Swe was sent to the border state to lead the government’s “probe”.

Under the Constitution, 25 per cent of parliamentary seats are set aside for the military, allowing the armed forces to veto any attempts to change the charter and giving the military the parliamentary numbers to appoint a vice president of its choice.

Last year they chose Myint Swe, a former junta stalwart who was on a US sanctions list.

The retired general was head of the feared military intelligence under former junta leader Than Shwe. He led special operations in Yangon during the bloody 2007 crackdown on protesting monks in the confusingly named “Saffron Revolution”, despite the fact that Burmese monks wear burgundy robes.

It is hard to imagine a less appropriate appointment to lead an “investigation” into allegations of state rape, arson and murder.

If Myanmar is to fulfil its potential and become a democratic, regional power, it needs to find a new leader to replace Suu Kyi.