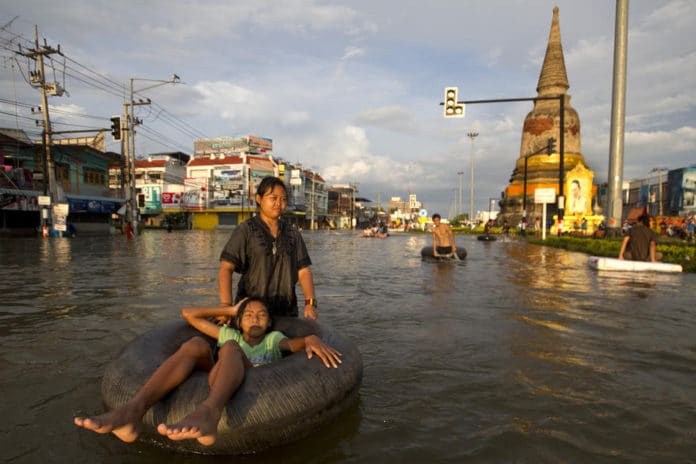 Thais are used to flooding but not normally in January. Source: Flickr

The Thai authorities expect revenue from foreign tourism to rise 8.5 per cent to 1.78 trillion baht (US$49.8 billion) during 2017, despite devastating flooding that is currently sweeping the kingdom’s south.

“This is another year that we will need to focus on quality tourism more than tourist numbers,” Thanasak said.

Last year, around 2.6 million foreign visitors arrived in the “land of smiles”, a rise of nearly 9 per cent from 2015.

The Thai tourist appeal appears impervious to crises with widespread flooding in the south killing 21 people as unseasonable storms have hit 12 out of 67 provinces.

An estimated 700,000 people have been affected while the kingdom’s rubber industry has been shaken.

“Severe flooding is because of the worst rainfall in more than 30 years”, Prime Minister Prayut Chan-O-Cha told broadcaster RTE.

The military has been deployed and roads and rail tracks have been blocked, airports closed, bridges have collapsed and thousands are trapped in their homes.

Southern Thai rubber farmers were just about to harvest their crops.

“I’ve had orders from China but we aren’t even sure if we can meet these orders because of the havoc the floods have caused,” Uthai Sonlucksub, president of the Natural Rubber Council of Thailand, was quoted saying by Reuters. “This the worst impact we have had in the area in 10 years.”

But Chen Namchaisiri, chairman of the Federation of Thai Industries told the Bangkok Post: “Floods mainly cause damage to roads, bridges and transport routes, but not much to machinery or the production process, which are generally covered by insurance. So the impact on the private sector is quite limited.”

Namchaisiri said the Joint Standing Committee on Commerce, Industry and Banking had estimated economic damage would amount to between US$280 million and US$420 million.