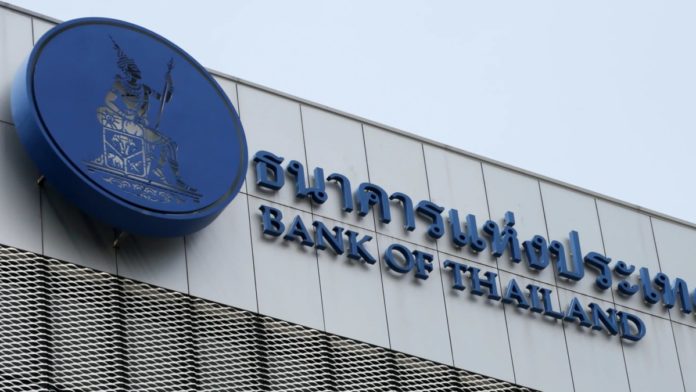 Thailand’s central bank on Wednesday (Nov 6) cut its benchmark interest rate to a record low of 1.25% as it tries to bolster sluggish growth and curb a surging currency.

The current policy interest rate is equivalent to the rate adopted during the 2009 global financial crisis.

The Bank of Thailand’s monetary policy committee voted 5-2 for a 25 basis points rate cut. The majority held that a more accommodative monetary policy would contribute to economic growth and support headline inflation to rise toward the target.

By contrast, two members of the committee voted to hold the rate steady. They reasoned that a rate cut might not lend additional support for economic growth compared to a potential increase in financial stability risks.

The rate cut was in line with the forecasts of 16 of 26 economists in a Bloomberg poll.

However, Amornthep Chawala, head of research at CIMB Thai, cautioned that “the [rate] cut is too small and too late. We have to wait and see whether it can save the Thai economy, which has slowed down significantly.”

Thailand’s gross domestic product expanded at its slowest pace since 2014 in the three months ended in June.

The kingdom’s economic planning agency, the Office of the National Economic and Social Development Council, has lowered its forecast for 2019.

In August, the government introduced an economic stimulus package worth 316 billion baht ($10 billion).

The rate cut is also a measure to rein in the surging baht.

Easing by Western central banks has encouraged buying of baht-denominated assets, pushing up the value of the currency. Applying downward pressure on the yield of these assets could help check capital inflows.

The baht—the best performer in emerging markets—has gained more than 8% against the dollar in the past year.

Nevertheless, the baht’s rise has created headaches for Southeast Asia’s second-largest economy, which depends heavily on exports and tourism.

“The central bank’s international reserve data suggests that the bank has been acting directly in the market [so that the baht does not] appreciate too rapidly,” a currency analyst said.

Reacting to the rate cut, the baht fell to 33.39 against the dollar, its weakest level in about three weeks.

New measures by the central bank that aimed at liberalizing capital outflows also contributed to the baht’s fall.