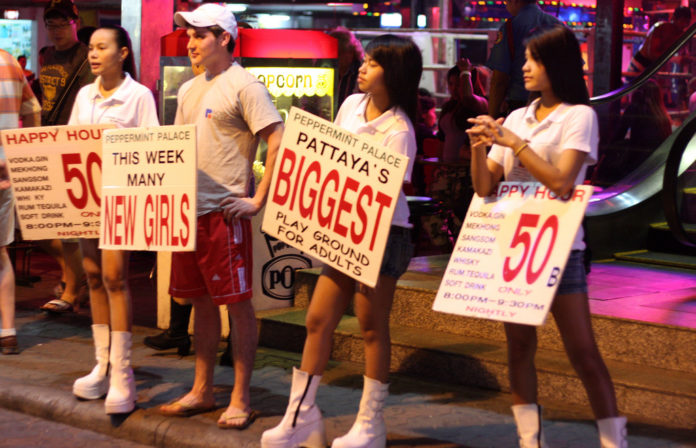 It took an unguarded remark from a Gambian minister to send Thailand into a bout of soul-searching this week about its reputation as a sex-tourist hotspot.

Thailand says it is striving to lose its reputation as a haven for sex tourism – which was estimated to raise US$6.4 billion in revenue in 2015 alone – following the Gambian culture minister’s quip.

“We have to admit the fact that such a reputation has been around for a while,” Prime Minister Prayut Chan-o-cha told the media. “There are still people who take up this occupation.
“All parties need to tackle this problem. We need to raise an awareness that this occupation is not good. Don’t do it,” the former general said.
The comments follow remarks from the tiny west African nation that were poorly received.

Gambia’s minister of tourism and culture Hamat Bah said in January that western tourists planning to travel to the Gambia in search of sex should stay away. The comments finally reached the “land of smiles” at the weekend, ruffling feathers.

“We are not a sex destination. If you want a sex destination, you go to Thailand,” Bah, who clearly misunderstood the different nature of the sex trade in the two countries, told the Kerr Fatou television show.

The reaction suggests how thin-skinned the kingdom is on the issue but whether proclamations by the government result in a genuine crackdown on the trade remains to be seen.

In 2017, the Thai tourism sector recorded its highest revenue in history, bringing in US$53.8 billion: a 12-per-cent increase from its previous record set in 2016. What proportion of this income is dependent on the sex trade and Thailand’s unregulated party scene is an unknown figure that will not be ignored in government.
The Thai embassy in Senegal, which serves The Gambia, expressed Bangkok’s displeasure at the remark. The Gambian high commission in Malaysia, which covers Thailand, was also contacted.
Thai culture minister Veera Rojpojchanarat tried to claim the kingdom’s reputation had improved in recent years.
“There used to be such an image, but now Thailand’s tourism industry has focused more on cultural aspects. The quality of the industry has improved,” Veera told the media.

This week, the police arrested a group of 10 from Russia who were running “sex-training classes” for fellow Russians in the notoriously seedy resort of Pattaya, and have charged them with working illegally in Thailand.

Just when Thailand was trying to wriggle out of the international spotlight, a self-described Belarusian “seductress” said on Instagram that she was asking for the US to help her escape a Thai jail in exchange for incriminating information about Donald Trump’s Russian links.

Anastasia Vashukevich, also known as Nastya Rybka, said she had been held since February 26 for “sex training”.

While apparently being taken to a Pattaya prison, she posted: “I’m ready to give you all the missing puzzle pieces, support them with videos and audios, regarding the connections of our respected lawmakers with Trump, [Paul] Manafort and the rest. I know a lot. I’m waiting for your offers and I’m waiting for you in a Thai prison.”

Russian opposition activist Alexei Navalny published a probe last month into Rybka’s connections with some of Russia’s richest and most powerful men.
Thailand’s reputation for vice did not need an injection of Russian sleaze.

Prostitution is illegal in Thailand but has been openly flaunted since it was established as an international destination in the 1970s to cater for US military personnel during the Vietnam war. Meanwhile, red-light districts in Hat Yai and other Malaysian border cities cater for the Malaysian market.

But the official narrative continues to stress zero tolerance.

“The Tourism Authority of Thailand ensures that its marketing strategy and policy to move Thailand forward as the ‘quality destination’ has stepped in the right direction… and strongly opposes any form of sex tourism,” the agency claimed this week.

Although the sex trade revolving around western tourists is more visible, the bulk of paid-for-sex involves the domestic, Thai market, with the ingrained culture of the “mia noi” or little wife.

The Kinsey Institute estimated that “90 per cent of the [Thai] male participants had had sex with a prostitute and 74 per cent had lost their virginity with a female sex worker”.

A former MP in Thaksin Shinawatra’s Thai Rak Thai, Thirachai Sirikhan, reportedly told The Nation in 2003: “To have a mia noi is an individual’s right. There should be no problem as long as the politician causes no trouble to his family or society.”

The newspaper quoted another MP from the subsequently deposed prime minister’s party saying if rules to ban mistresses were enforced, the party would only be able to field around 30 candidates, compared to the more than 200 MPs it had at the time.

Thailand’s Public Health Ministry estimates there are more than 120,000 sex workers in the country and a 2014 UNAids report put the number at a specific 123,530.

Back in 2004, Dr Nitet Tinnakul of Chulalongkorn University estimated that the trade involved 2.8 million people, including 2 million women, 20,000 men and 800,000 under-18s. Nitet said the number included cleaners, accountants and even corrupt police receiving payments from bars.
Last month bungling UK Foreign Secretary Boris Johnson, referring to the Thai sex trade in his Brexit speech, said: “More than a million people…go to Thailand every year where our superb consular services deal with some of the things that they get up to there”.

It seems it will take more than a few government press conferences to shake off Thailand’s seedy reputation.