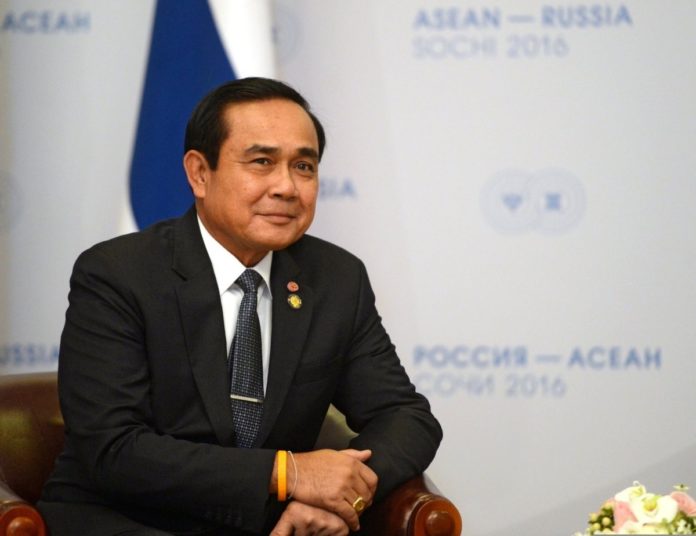 General Prawit Wongsuwan, who receives a modest military salary, has been seen wearing 25 costly watches, none of which appears on his most recent declaration of assets. His explanation that he borrowed them from friends has been mocked on social media.

“Do you really think Thais would believe your story?” former senator Rosana Tositrakul asked. “You gave such an answer because you don’t think the Thai public can do anything to you.

“If you don’t take any responsibility, you’ll bring down the whole government,” she added.

The generals, who seized control in the bloodless May 2014 coup, are under increasing pressure to hold a long-delayed election.

Duncan McCargo, a Thai specialist at the University of Leeds, said: “There’s a growing appetite to have the elections and see what transpires, even among those who were initially very sympathetic to the 2014 coup.”

And Prime Minister Prayuth Chan-Ocha (pictured) has so far ignored calls to dismiss Prawit while fuelling accusations of hypocrisy given the junta’s anti-corruption proclamations.

The prime minister last week said the watch scandal was a “personal matter” and dismissed calls to suspend Prawit while a corruption probe was conducted.

Last month when the reshuffled cabinet was unveiled to photographers, Prawit, who is also the minister of defence, raised his hand to shield his eyes from the sun, exposing his watch. An examination of the records showed that he had not declared the Richard Mille watch on his assets list.

In Los Angeles, a Thai expat using the name CSI-LA searched the web for previous photos of Prawit. Others joined in and the watch count reached 25 with an estimated combined value of US$1.2 million.

For the third time since Prayuth took power in 2014, a planned general election to restore democracy has been postponed.

The decision on Thursday by the military-appointed National Legislative Assembly to delay the vote means no general election is likely before early 2019, instead of November as previously promised by Prayuth.

The outcry over the watch scandal is focusing discontent over extended junta rule, analysts say.

An official survey this month said the junta’s popularity was at its lowest level since the 2014 coup.

The generals were “paying the price for overstaying as public scrutiny mounts”, said Thitinan Pongsudhirak of Chulalongkorn University in Bangkok.