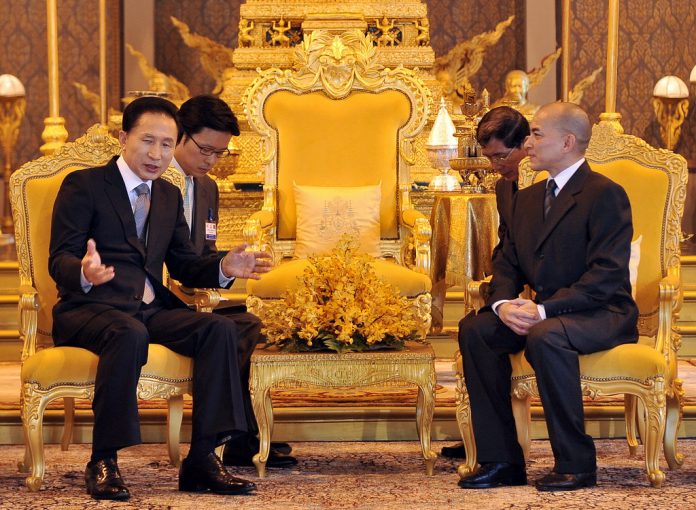 Then president of South Korea, Lee Myung-bak, with King Norodom Sihamoni in 2009. Sihamoni has largely gone under the radar since taking the throne. Source: Flickr

The president added: “Singapore is keen to further strengthen relations with Cambodia.” Around 250 Singaporeans are electronically registered as working in Cambodia.

Tan, who is visiting Laos next, attended a wreath-laying ceremony at the monument to Cambodian independence.

The 20-metre tall, lotus-shaped monument in central Phnom Penh commemorates independence from France in 1953 and the millions who died in Cambodia’s protracted 20th-century conflicts.

He was received by acting defence minister Chay Saing Yun.

Tan is due to meet King Norodom Sihamoni, 63, and Prime Minister Hun Sen, one of the world’s longest serving heads of government.

The king is in the headlines at the moment, which is unusual for the discreet monarch.

Sihamoni, who became king in 2004, is largely respected by Cambodians and seen as being above politics.

Cambodia’s constitution says the monarch is “inviolable”, or not to be treated disrespectfully.

Cambodia’s kings were once seen as semi divine but the role is now largely ceremonial with Sihamoni fulfilling his duties while keeping out of Cambodia’s corruption-ridden politics.

Sihamoni speaks English, French and Czech and spent much of his adult life abroad, pursuing a career in classical dance before returning home to take the throne.