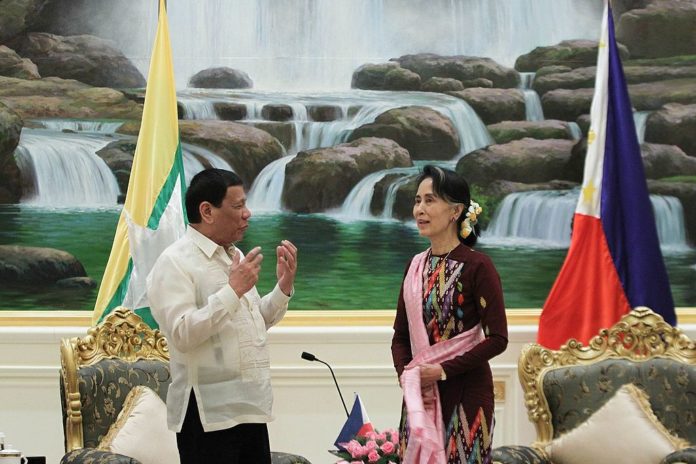 Myanmar’s State Counsellor Aung San Suu Kyi will skip this weekend’s Asean summit in Singapore and President Win Myint, who was sworn in last month, will attend instead.

Presidential spokesman Zaw Htay did not explain why the 72-year-old, who is also foreign minister, was avoiding the event or say whether it might be due to criticism of her handling of the Rohingya crisis.

It will be the first time she has missed an Asean summit since taking office in 2016.

Suu Kyi was pressed on the issue at a three-day summit between Asean and Australia in Sydney last month.

She endured protests calling for her to stand down and to face prosecution and Malaysian prime minister, Najib Razak, said the sustained displacement of the Rohingya would become a security issue for the entire region.

Najib faces re-election on May 9 and might be keen to shore up his popularity with the Muslim majority by focusing on non-contentious foreign issues.

In Australia, a group of five human rights lawyers filed a personal prosecution application in Melbourne magistrates court, seeking to prosecute Suu Kyi under the principle of universal jurisdiction for crimes against humanity.

She also cancelled a public appearance in Australia, where she was expected to face questions from the audience, due to “ill health”.

Suu Kyi was due to give a speech at Sydney’s Lowy Institute.

Meanwhile, the Australian army has asked Thailand to consider inviting Australia to become an Asean dialogue partner when the kingdom assumes the rotating chair next year, according to defence spokesman Rangsan Yaowarat.

The request was made by Australian army chief Angus Campbell, who is on an official visit to Thailand as a guest of the Thai military.

President Rodrigo Duterte, rather than chartering a commercial plane for his trip to the summit in Singapore, will use an eight-seater plan to save cash.

Presidential spokesman Harry Roque said: “It’s expensive to charter a plane and a leaner delegation would mean lesser cost for the taxpayer.

“It’s not a long flight … I think aside from [aide Christopher ‘Bong’ Go] other people in the plane will be staff complement of the president, including a nurse.”

Upon taking office, Duterte ordered that the presidential plane be converted into an air ambulance, saying he would use commercial flights or private jets.

Duterte was reportedly the most-travelled president in his first year in office, with 19 foreign trips.