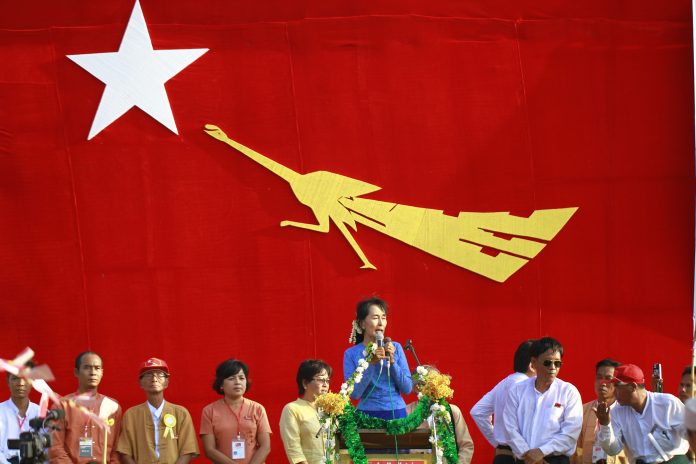 Aung San Suu Kyi has had an uneasy relationship with the military since her return in 1988. Source: Wikimedia

Aung San Suu Kyi has made some significant developments with her relationship with the military.

She also met several senior ethnic army leaders that have being fighting for autonomy from Nay Pyi Taw for around 60 years to ask them to participate in her planned union-wide peace conference scheduled for late August.

The so-called 21st-century Panglong conference is the focal point of Suu Kyi’s attention and the most significant challenge for her government.

The Panglong Agreement was reached in Panglong, southern Shan State, between her father Aung San and the Shan, Kachin, and Chin peoples on February 12, 1947. The agreement accepted “full autonomy in internal administration for the frontier areas” and envisioned a federal union. It is celebrated in Myanmar as Union Day each February 12.

There are hopes that the new Panglong will make significant strides towards establishing a full democracy and federal state, while leading to revisions of the controversial, military-drafted 2008 Constitution.

There are also signs that the commander-in-chief of the defence services, Senior General Min Aung Hlaing, is developing a far stronger working relationship with Suu Kyi, with the pair being seen together in public.

Last week on Martyrs’ Day, marking when Aung San was assassinated 69 years ago, Suu Kyi and the military chief both attended. The general paid a personal visit to her lakeside residence for a small private ceremony.

It is the first time a military commander has visited her home, since Aung San was alive.

The military remains the most important institution in the country and, under the 2008 Constitution, the armed forces maintain the right to seize power if national security is “endangered”.

He met Suu Kyi in Vientiane on the sidelines of the Asean foreign ministers’ summit and said the nations had established a “paukphaw friendship”, meaning brotherly in Burmese.

Beijing was ready to strengthen high-level exchanges, advance pragmatic cooperation and boost cultural exchanges to inject dynamism into the relationship.

Suu Kyi is always diplomatic, to the point of being bland.