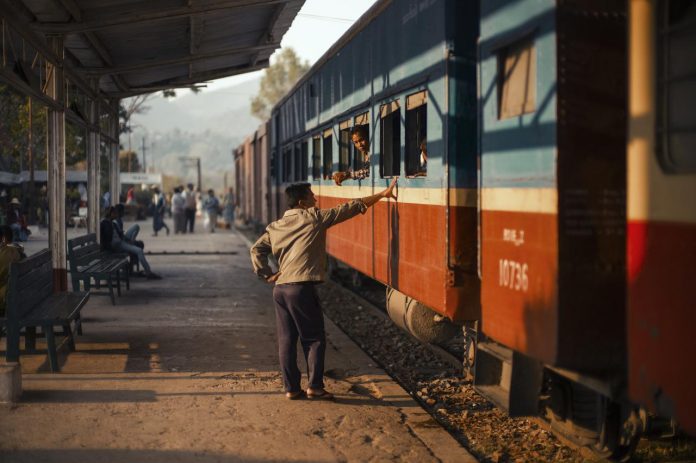 Myanmar’s creaking infrastructure might benefit from US investment. Source: Wikimedia

US economic trade sanctions on Myanmar are being relaxed to support the development of democracy and a market economy, with the announcement coming from President Barack Obama as he met State Counsellor Aung San Suu Kyi.

The US relaxed broad sanctions in 2012 when the military-backed government started taking credible steps towards democracy, in part allowing Suu Kyi to take a seat in parliament.

Targeted restrictions on military-owned firms, tycoons and associates of the former junta would remain, Washington said. Obama told Congress he wanted to reinstate the trade benefits that the US gave to least-developed countries. These were suspended in 1989, after the massacres of pro-democracy protesters in 1988, which saw Suu Kyi emerge as a political leader.

US firms and banks have largely avoided the tempting Burmese market and are forced to use Singapore as a conduit for investment. By removing most of the remaining sanctions, the White House has cleared the way for businesses to invest and trade more freely in an economy that is growing at 8 per cent, and for Myanmar’s chronically underdeveloped export sector to trade in the US at lower tariffs under the Generalised System of Preferences trade privileges. The country’s controversial textile manufacturers will no doubt have taken note.

The Economist argued that Suu Kyi now needed to provide an improvement in living standards for the people who elected her. “The shift in American policy appears to have been driven by a change in Miss Suu Kyi’s thinking,” the magazine said. “The companies and industries on the sanctions list make up only a small portion of the Burmese economy. Yet some would-be investors steer clear of the country altogether for fear of getting tangled up in the sanctions regime, while others complain about the high cost of making sure that they do not. Miss Suu Kyi seems to have judged that such harm now outweighs the benefits of maintaining sanctions.”

Washington said 111 citizens and companies would be dropped from a US Treasury blacklist but a visa ban would still prevent certain members of the military from visiting the USA. The Pentagon’s assistance to Myanmar’s army will be limited to English-language lessons and training in human rights with no weapons sales or military training.

It is hoped the reforms will increase job opportunities thanks to increasing investment and trade and access to some better quality products. The removal of barriers will give US firms more leverage with China, which has been Myanmar’s principal source of foreign investment for years.

Human-rights groups worry the move will reduce western influence over the military. The NGO Global Witness, which has conducted extensive investigations into the military’s grip on natural resources, calls the move “a major setback”. They reckon it will hinder efforts to clean up Myanmar’s corrupt culture and, specifically, the vast jade trade, where profits are concentrated in the hands of a few generals, tycoons and Chinese mining firms.