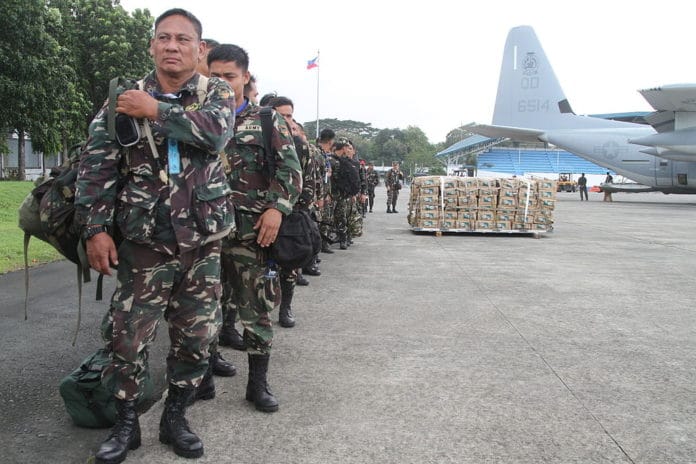 A Filipino soldier kidnapped last week in the southern Philippines by Abu Sayyaf has been found beheaded hours after the military claimed to have killed three more members of the group in a separate operation.

The Philippines is preparing to host several Asean summits in Manila this month with former foreign secretary Albert del Rosario saying the archipelago had an opportunity to assert effective leadership of Asean by discussing the arbitral tribunal ruling for a lawful approach to the South China Sea dispute.

“Our being chair of Asean would have been a unique opportunity to show our resolve … we should focus on the principle of centrality and the chair’s ability to propose the agenda,” Del Rosario said.

Meanwhile, the severed head of Sergeant Anni Siraji of the 32nd Infantry Battalion near his body in Patikul on Sulu, said regional commander Brigadier Cirilito Sobejana.

The sergeant was involved in attempts to forge a peace deal, Cirilito said.

“He is involved in peace efforts. He is not actually a combatant. We are using him to engage stakeholders because he is a Tausog [like most of Abu Sayyaf],” the Sulu commander said.

The military had earlier said three more Abu Sayyaf militants had been gunned down on the popular holiday destination of Bohol where they were in hiding after a failed attempt to kidnap holidaymakers.

The idyllic island is far to the north of Abu Sayyaf’s southern strongholds on lawless, predominantly Muslim islands like Sulu.

“We have reports indicating that they were also wounded and running out of supplies,” said military spokesman Colonel Edgard Arevalo.

Around 10 militants landed in three speedboats on Bohol on April 11 with the reported intent of seizing hostages. Western embassies have since issued travel warnings about visiting the island, which might have been one of the militants’ aims.

Six were apparently killed in an initial firefight and another last week. One of those killed was a militant associated with the kidnap and execution of Canadian and German nationals, the army announced.

Abu Sayyaf, which has pledged allegiance to so-called Islamic State, was originally a separatist movement but now largely concentrates on organised crime and piracy.

The group holds around 30 captives, many of whom are Vietnamese sailors and fishermen.