The Singaporean authorities are bracing for terror attacks. Source: Wikimedia

“We hope that with this group, they will begin that domino effect, [bringing] outreach to more and more people,” said Lee. “What is critical is to go door-to-door to emphasise the seriousness of the threat that faces us and to get Singaporeans to be involved.

“It is not a programme, it is not a cause. It is a national movement which everyone needs to participate in because the stakes are very high.”

The revamped event, a key event for the SG Secure movement, involved simulated terror attacks and workshops that aimed to “sensitise, train and equip” city-staters with skills and information to respond to an incident.

Lee responded to a suggestion that auxiliary police could conduct public education on dealing with an attack.

“We’re involving community volunteers, full-time national servicemen, teachers, educators and Singaporeans from all walks of life to drive the message home because it’s important to us,” Lee said.

“(Today) is not just a programme but a national movement, which everyone needs to participate in because the stakes are very high.”

It was announced that Home Team officers would be deployed to teach people how to evacuate an area in the event of an attack.

A pocket emergency guide, with contacts and basic tips on skills like using a fire extinguisher and first aid, was distributed.

“[It] is a good example of how each of us, as residents, can play a part to reach out to fellow residents by sharing information on how we can keep ourselves, our families and friends, safe and secure,” Lee announced.

Similar events will be held across the city-state in the next two years. During the Jurong Spring simulation, two suspicious-looking men left a bag at an ATM but residents called the police who evacuated the area.

Volunteer Chua Boy, 66, who pretended to have a heart attack cardiac arrest during the evacuation, said elderly residents needed to know how to react in an emergency as they were particularly vulnerable.

Home Affairs Minister K Shanmugam said a terrorist strike was a “clear and present threat”, and citizens must be ready.

“It’s no longer an idea of ‘the police will take care of it’, it’s individual responsibility … it’s each one of us. The message is about every Singaporean taking responsibility. It’s not easy. It’s going to take time. But we have to do it,” Shanmugam said. 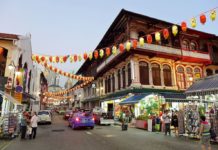