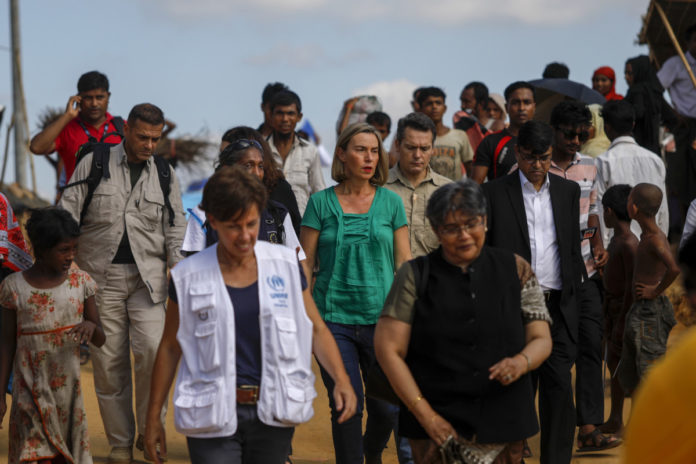 The European Union is investigating Myanmar’s alleged Rohingya genocide as it decides whether to remove trade preferences granted to impoverished nations.

The probe, and a similar one on Cambodia, has sparked a debate about whether the EU’s executive branch, the European Commission, should use its “everything but arms” (EBA) programme to pressurise its trading partners.

The move would not have a significant impact on foreign investment because EU member states were not among the leading investors, said Than Aung Kyaw, deputy director general of Myanmar’s Directorate of Investment and Company Administration (Dica).

EBA trade preferences give poor countries access to EU markets without duties and quotas for everything except weaponry. But the agreements are conditional based on respect for human rights.

The EU accounted for 47 per cent of Myanmar’s clothing exports last year, more than the two next biggest markets, Japan and South Korea, combined.

In the first six months of 2018, the bloc accounted for 55 per cent of overall clothing exports, amounting to US$1.8 million.

Critics say removing the preferences will cause economic hardship to civilians while failing to affect the perpetrators.

Those who support action say Cambodia and Myanmar would be given well over a year to reform.

The joint mission by the commission’s trade representatives and the bloc’s diplomatic service starts this week. It is due to study why more than 700,000 Rohingya were driven into neighbouring Bangladesh after August 25 last year, reporting arson attacks and gang rape by soldiers and Buddhist mobs.

The EU has said its trade preferences can force Nay Pyi Taw to respect Rohingya rights.

Sweden’s Cecilia Malmstrom, the EU’s trade commissioner, said this month that there was “a clear possibility” of the preferences being withdrawn.

“Our EU trade policy must be led by our values,” she wrote in her blog. “Accordingly, when we are faced with blatant disregard for those values, the EU must act.”

A visit by the EU’s foreign policy commissioner, Federica Mogherini, to Rohingya in Bangladesh in November 2017. Picture credit: Flickr