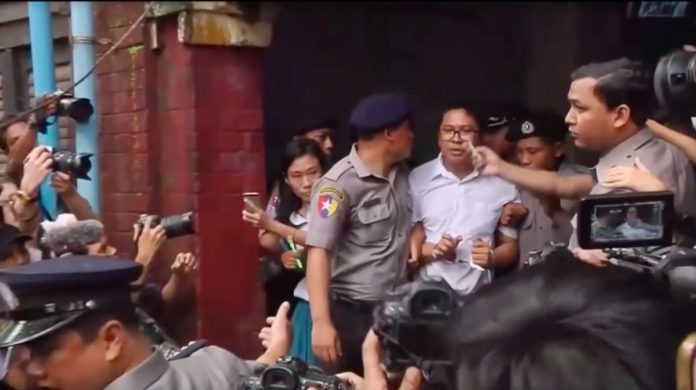 Two Reuters correspondents have been jailed in Myanmar after being found guilty of breaching the colonial-era Official Secrets Act while reporting on the murder of Rohingya Muslims in Rakhine State last year.
Wa Lone, 32, and Kyaw Soe Oo, 28, were arrested after reporting that 10 Rohingya were murdered and dumped in a mass grave on September 2, 2017.
The new UN human rights chief Michelle Bachelet said she was “shocked” at the sentences, calling the trial a “travesty of justice” and urging for their release.
On her first day in the job, the former Chilean president told the media: “I think the information they gave on the massacre was of public interest.
“So I will urge the Myanmar government to release them as soon as possible, immediately.
“I was shocked today in the morning, when I woke up and learned that these two journalists from Reuters have been imposed a sentence of seven years of jail.”
Yangon northern district judge Ye Lwin jailed the two Burmese journalists for seven years, saying the “confidential documents” would have been useful “to enemies of the state and terrorist organisations”.
Kyaw Soe Oo said as he was led away: “You can put us in jail, but do not close the eyes and ears of the people.
“We know we did nothing wrong. I have no fear. I believe in justice, democracy and freedom.”
Brad Adams of Human Rights Watch said: “The outrageous convictions of the Reuters journalists show Myanmar courts’ willingness to muzzle those reporting on military atrocities.
“These sentences mark a new low for press freedom and further backsliding on rights under Aung San Suu Kyi’s government.”
British ambassador Dan Chugg, who attended the hearing, said the verdict “dealt a hammer blow for the rule of law”.
The men said they suffered from harsh treatment during interrogation and claimed they were framed, which was confirmed by a police captain, Moe Yan Naing, during the case. He testified that he had been ordered to plant the documents on the journalists and was immediately jailed after his appearance in court.
The Reuters story on the massacre said 10 men, including fishermen, traders and school pupils, were shot by the security services in the Rakhine village of Inn Din, and two men were “hacked to death” by Buddhist villagers.
Soe Chay, 55, a retired soldier who reportedly helped dig the grave, was quoted saying by Reuters: “When they were being buried, some were still making noises. Others were already dead.”
The military-controlled authorities said the men belonged to a group of 100 “terrorists”.