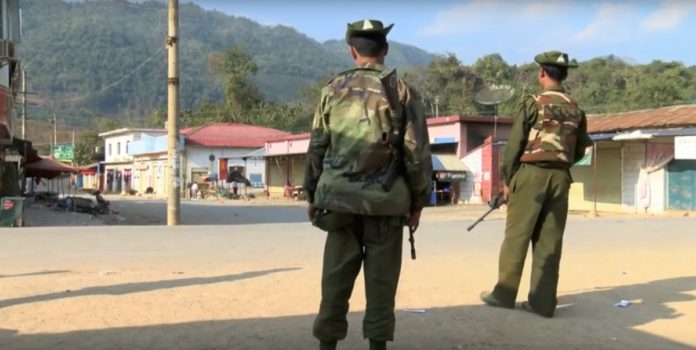 At least 30 people have been killed on Myanmar’s border with China after ethnic minority insurgents, apparently wearing police uniforms, launched an attack.

It is the heaviest fighting in the Chinese-speaking Kokang region of Shan State since battles in 2015 left dozens dead and displaced tens of thousands of civilians.

A separate group then attacked Laukkai, the main town in Kokang.

“According to initial information, many innocent civilians including a primary school teacher… were killed because of attacks by the MNDAA,” Suu Kyi’s office announced.

Suu Kyi is currently gearing up for her second so-called 21st-century Panglong peace conference later this month, despite the ongoing violence in the border regions where she has little influence. The military-drafted 2008 Constitution grants the armed forces control of three of the most important ministries: defence, home affairs and border security.

It said at least five civilians and five police officers were killed.

Twenty “burned bodies” had been found with weapons, with the authorities claiming they were MNDAA rebels.

The MNDAA was formed from the Communist Party of Burma, a Chinese-backed guerrilla force that fought against the Burmese junta in the 1960s and 1970s.

The State Counsellor’s Office said the attackers destroyed a hotel, burned cars and carried out robberies, adding that the military had been trying to expel rebels from the town and operations would continue.

“Residents in town are fleeing. We do not know exact figures yet,” an army officer told AFP.

The Northern Alliance, an umbrella group of powerful rebel armies that have refused to sign the government’s national ceasefire agreement, confirmed the attack in Laukkai.

It posted on Facebook that the attack was “to resist an enemy offensive in self-defence”, detailing recent Tatmadaw offensives.

Similar fighting has been taking place to the northwest in Kachin State involving different ethnic rebel armies, which they say are in response to government attacks.

In early 2015 tens of thousands of civilians fled, largely into China, during months of fighting in the mountainous region.

The Chinese authorities claimed Burmese fighter jets had bombed its side of the border during the fighting.

Kokang residents speak a Chinese dialect and the yuan is the common currency.