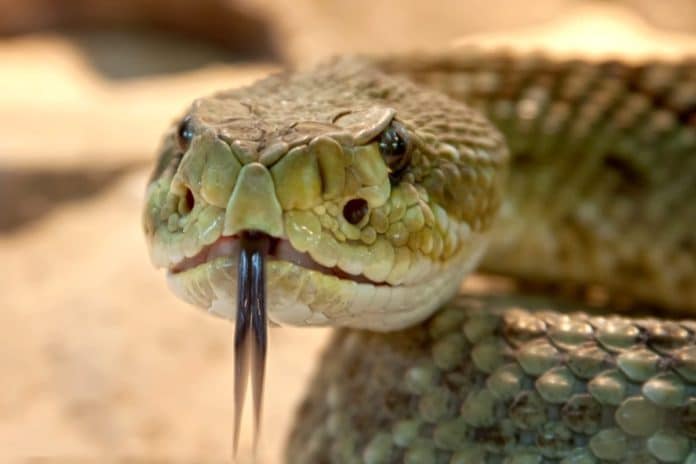 A screaming suspect has been threatened with having a live snake forced in his mouth during a police interrogation by the Indonesian colonial authorities in resource-rich Papua.

Video of the incident, which has brought international attention on the Papuan independence movement, shows the screaming suspect with the snake around his neck as laughing Indonesian police try to get him to admit to stealing mobile phones.

The suspect, who is believed to be a native Papuan, is seen with his hands tied behind his back, shouting as a snake is forced towards his face.

A man’s voice tells the man to open his eyes as an officer threatens to put the snake into his mouth or up his trousers.

“We will work more professionally in the future,” he added.

A police spokesman said the snake had been kept as a pet at the station and was used to scare away drunks disrupting the neighbourhood.

The video went viral after human rights lawyer Veronica Koman shared it on Twitter. She said the video confirmed what jailed Papuan activists had previously reported.

Koman said Sam Lokon of the National Committee for West Papua activist group faced a similar treatment after being arrested last month. “He was beaten, kicked, slapped and his head was pushed towards the snake to force him to admit that he had stolen a motorbike,” the lawyer said.

“Many West Papuans… who have been in and out of jail for political reasons said that they have long known that snakes are being used by police and military. So they’re not surprised.”

After initially brushing off the incident with a standard apology, police chiefs later said they had investigated and taken “stern action” against the officers involved.

Chief of Jayawijaya police Tonny Ananda Swadaya had earlier told the media that the snake was non-venomous and tame while accepting that the “investigator was not professional in doing his job”.

An officer asks: “How many times have you stolen mobile phones?”

The suspect replies: “Only two times.”

The western half of the giant island of New Guinea was transferred from Dutch to Indonesian rule in 1963. It was incorporated into Indonesia in 1969 following a UN-sponsored vote by tribal leaders that has been dismissed as a fix.

In the so-called Act of Free Choice, the only voters were 1,063 people picked by the armed forces and compelled to vote in favour of Indonesian annexation, often while their families were held captive.

Split into the provinces of Papua and West Papua, the ethnically distinct Melanesian region has some of Asean’s most valuable natural resources but the two provinces remain among the country’s poorest.