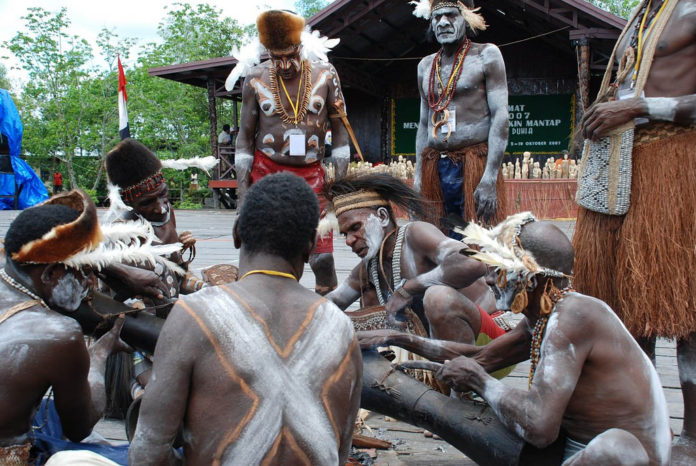 The Asmat of Papua Province. The provinces are ethnically distinct from the rest of Indonesia.

The unstable Indonesian provinces of Papua and West Papua are experiencing interesting times.

While human rights, media coverage and protests are muzzled as the provinces demand independence and closer ties with their Melanesian brothers throughout the South Pacific, Jakarta’s dispute with mining giant Freeport has created a common enemy.

As the Jakarta government moves to extract a greater slice of Freeport’s copper and gold profits from Papua, it has taken common cause with the indigenous community, which points to the environmental impact of the world’s second-largest mine and its uneven distribution of wealth.

As is often the case where human rights are curtailed, protests are far more likely to be tolerated if they target foreigners rather than the central government.

But French journalists Jean Frank Pierre and Basille Marie Longhamp were jailed last week as the Indonesian authorities again demonstrated their contempt for media freedom in the Papuan provinces.

The police detained and deported the two reporters, who were filming a documentary for Indonesia’s Garuda Airlines. They allegedly lacked the “necessary documents from related institutions”.

The immigration department said the journalists had ordinary visas without the necessary documents.

They were barred from returning to Indonesia for at least six months to deter others from following them.

Indonesia’s President Joko “Jokowi” Widodo speaks about opening up Papua to the foreign media but NGOs and journalists have very little access to the troubled eastern provinces. In May 2015, the president said he would lift the 25-year unofficial ban on foreign media access to Papua, where permits were refused and journalists were left in limbo, always vulnerable to deportation.

Two international television reporters were detained in 2014 for tourist-visa violations and were sentenced to two and a half months in jail for reporting in Papua. In 2010, two journalists were deported after filming a students’ human rights rally.

Human Rights Watch argues: “[Abuse] of media freedom for foreign journalists in Papua, along with visa denial and blacklisting of reporters who challenge the official chokehold on Papua access, has continued unabated. That’s mainly because Jokowi has singularly failed to issue a formal written directive instructing Indonesia’s bureaucracy and security forces to lift these restrictions. But it’s also due to the deeply rooted perception among many government and security agency officials that foreign media access to Papua is a recipe for instability in a region already troubled by widespread public dissatisfaction with Jakarta, and a small but persistent armed independence movement.”

“The government needs to understand that blocking media access on over-broad security grounds doesn’t just deter foreign news reporting about Papua, it raises troubling questions about what the government might be hiding there,” the rights NGO argued.

By contrast, in the Freeport dispute protesters have been allowed to gather to express their unhappiness with the vast mining operation in the province.

Papuans across Indonesia held demonstrations on Monday over the contract dispute with the government which halted digging.

Protest coordinator Samsi Mahmud said hundreds of members of the Indonesian People’s Front for West Papua and the Alliance of Papuan Students held protests in 16 cities, including at the Freeport offices in Jakarta and the US Consulate in Bali.

“Our demand is only one, Freeport should be closed down and leave Papua,” Mahmud said.

He described the signing of the first contract between Jakarta and Freeport in 1967 as an “illegal act” as regional conflict between Indonesia and the former Dutch colonial masters persisted.

Papuans consider Freeport-McMoRan to be closely linked to the military occupation of the mineral-rich region since 1967.

“It has caused violence that resulted in misery and suffering to the people of Papua,” Mahmud said.

The firm’s subsidiary in the archipelago, PT Freeport Indonesia, halted operations at its Grasberg mine last month due to the contract dispute with Jakarta, which is seeking to convert the existing contract so Freeport hands over a 51-per-cent stake within a decade and gives the central government control of the base selling price for minerals.

Freeport Indonesia has rejected any contract changes and is talking about taking the case to international arbitration.

And for now the authorities let Papuans protest, presumably as it sees demonstrations as a means to increase pressure on Freeport.

The students carried banners reading “Close Freeport” and said Papuans had not benefited from 50 years of digging by the US-based firm.

“Close Freeport. Freeport has caused extensive damage to the environment in Papua,” a student said.

Residents said there had been a series of preceding protests.

Vinsen Oniyoma, a spokesman for the protesting Independent Traditional Community, said Papuans had never been involved with the mines and their interests were not considered by Freeport. The rights of the major tribal communities, Amungme and Kamoro, over land used by Freeport, had never been respected, he said.

Last week around 300 protesters joined a similar rally organised by the Association of Indonesian Miners and the Indonesian Islam Student Movement.

If Freeport wanted to continue to operate in the giant province, which accounts for about 25 per cent of Indonesia’s landmass, it should build a smelter in Papua, pay more tax and comply with Jakarta’s new share divestment regulation, spokesman Oktovianus Wally said.

After 50 years of brutal exploration by Jakarta, the Papuans are now being used as a bargaining chip in the dispute with Freeport.

If it sheds some light on this intriguing corner of the archipelago, it might have been worthwhile.