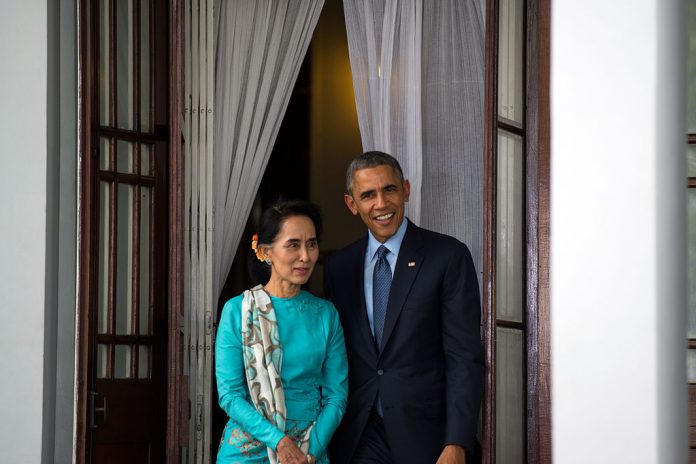 US trade sanctions dating back to 1989 against Myanmar will be lifted, according to President Barack Obama.

The country’s de facto leader, Aung San Suu Kyi, arrived in Washington on her first official visit. Myanmar’s access to trade benefits for poorer nations was suspended in 1989 after the then ruling junta’s violent crackdown on pro-democracy protests the previous year, when Suu Kyi rose to prominence on the world stage.

Obama said it now time for the country to benefit from preferential tariffs as it emerged from decades of military rule.

He confirmed the move in a letter to Congress meaning Myanmar would be added to the Generalised System of Preferences list, which exempts developing countries from import duties.

There is still a “blacklist” of at least 100 firms and tycoons with links to the former military junta, as well as the trade in jade and rubies. Suu Kyi reportedly asked for sanctions which affected the nation’s economy to be removed.

The US eased some sanctions in May to support Suu Kyi’s political reforms but maintained most of them to apparently penalise those it viewed as hampering her administration.

Myanmar’s parliament is pushing to overhaul rules on foreign investment this week. New investment approval licences have dropped since the National League for Democracy took power in April and some firms and investors have criticised Suu Kyi for neglecting economic reforms.

Meanwhile, 46 NGOs have sent an open letter to Obama saying he should delay easing sanctions amid ongoing human rights abuses by the military and against Rohingya Muslims in Rakhine State.

“While incremental progress is being made in Burma, it is vital that the US continue to act in support of Burma’s people, particularly those still suffering under the current government,” it said. “To lift sanctions prior to tangible change for suffering communities would be a disservice to those vulnerable peoples who deserve international protection.”

“After witnessing her lack of regard for Burma’s dismal track record on this issue, I plan to pay very close attention to her government’s efforts to prevent innocent human beings from being trafficked and sold into forced labour and sex slavery,” Corker announced in a statement.