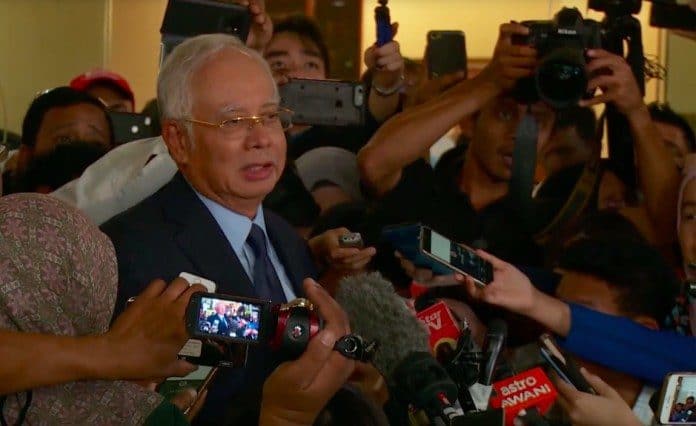 Malaysian police have arrested ex-prime minister Najib Razak, who is now facing at least 21 charges related to more than US$620 million in public money that reached his personal bank accounts.
The 65-year-old (pictured) also faces money-laundering, bribery and criminal breach of trust charges from July, which he denies. He has repeatedly claimed the cash was a donation from a Saudi prince and unrelated to the 1MDB sovereign wealth fund scandal.
Billions more were pocketed by other figures and their relatives, according to the US Department of Justice, which says at least US$2.5 billion was laundered through shell companies and used to buy luxury items and invest in the US.
In July, the department said: “These assets allegedly included high-end real estate and hotel properties in New York and Los Angeles, a US$35-million jet aircraft, works of art by Vincent Van Gogh and Claude Monet, an interest in the music publishing rights of EMI Music and the production of the 2013 film the Wolf of Wall Street.”
The Malaysian Anti-Corruption Commission said the charges related to 2.6 billion ringgit (US$628 million) found in Najib’s account.
The charges, which took 35 minutes to read out in court, include nine counts of receiving bribes, five counts of using illegal proceeds and seven of transferring the proceeds to political allies, businesses and the United Malays National Organisation (Umno), his political party. He is accused of carrying out the transactions between 2011 and 2014.
After spending the night in jail, Najib was set bail at 3.5 million ringgit yesterday (Thursday).
“All the charges today will give me a chance to clear my name – that I am not a thief,” he told the media after the hearing.
Najib said he “returned a large sum of money” after leading his party to surprise defeat in the May general election.
Umno found the scandal-ridden Najib a considerable burden ahead of the election but was incapable of ditching him for a more plausible prime ministerial candidate, suggesting the internal democratic procedures within the party had broken down.
Najib’s defence team continues to be led by his veteran lawyer Muhammad Shafee Abdullah, who last week appeared in court charged with numerous counts of 1MDB money laundering.
Najib’s wife, Rosmah Mansor, and his other associates are accused of spending millions on housing, jewellery, handbags, yachts and celebrity parties. Charges against Rosmah are said to be imminent.