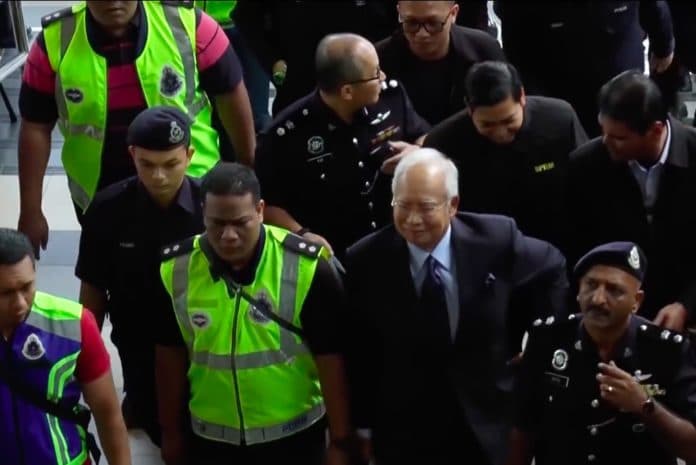 Former Malaysian prime minister Najib Razak (pictured) has been charged with six counts of criminal breach of trust, involving more than US$1.5 billion of state funds, in addition to the 32 charges he already faces for money laundering and corruption.
Ex-treasury boss, Mohamad Irwan Serigar Abdullah, 61, was also charged with criminal breach of trust and is the highest-ranking civil servant to be charged since Najib lost the May general election.
Both men deny the charges.
Separately, former intelligence chief Hasanah Ab Hamid has also been charged with a criminal breach of trust involving US$12.1 million of government assets.
The one-time director general of the Malaysian External Intelligence Organisation denied the charges that relate to activities before the May 9 election.
All three defendants could face up to 20 years in jail, whipping and a fine but they might be exempt from the whip as they are over 50.
Many aspects of Hasanah’s case are related to national security and were not made publicly available.
The 61-year-old Hasanah is accused of writing to the CIA to enlist US intelligence support for the election.
Hasanah’s lawyer, Shaharudin Ali, said the case was not related to troubled sovereign fund 1Malaysia Development Berhad (1MDB).
1MDB it is alleged to have funded the purchase of property in Beverly Hills and Manhattan, including an apartment once owned by Jay Z and Beyonce, a US$35 million private jet, the US$260 million yacht Equanimity, a US$3.2 million Picasso given to Leonards DiCaprio, US$85 million in Las Vegas gambling debts and a birthday party for Malaysian financier Jho Low where Jamie Foxx, Chris Brown, Ludacris, Busta Rhymes and Pharrell Williams performed and Britney Spears jumped out of the cake.
A defiant Najib told the media outside the court: “Nothing in the charges show that any of the acts I undertook resulted in any benefit to me.
“There shouldn’t be any belief that any of the monies stated in the charges were lost, or that there were any elements of self-interest.”
Four of the six charges filed yesterday (Thursday) involved about 4.78 billion ringgit (US$1.4 billion) from a deal between 1MDB and Abu Dhabi’s state fund IPIC, said Azam Baki, a deputy commissioner at Malaysia’s anti-corruption agency.
Last year, 1MDB agreed to pay US$1.2 billion to the Abu Dhabi fund, to settle a dispute over bond payments, according to the sovereign wealth funds.