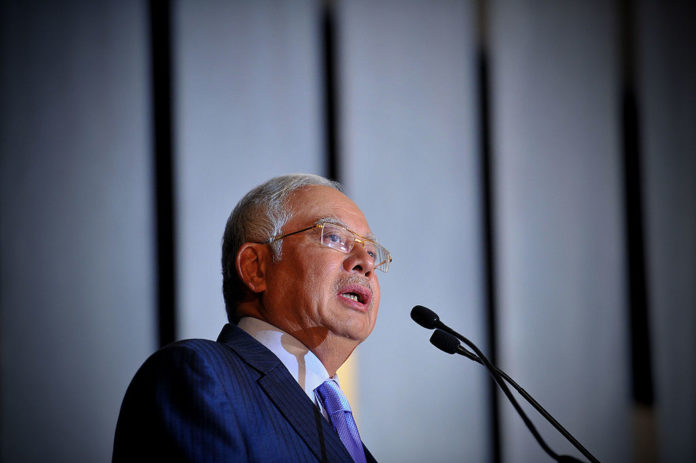 Najib Razak, the former prime minister of Malaysia, was arrested by anti-corruption officials yesterday (Tuesday), amid the ongoing 1MDB investigation and the missing US$4.5 billion in state funds.
Najib’s arrest was linked to a suspicious transfer of US$10.6 million into his bank account from SRC International, a former 1MDB subsidiary, using multiple intermediaries. Prosecutors expect to bring him to court to be charged today.
Najib and his associates are accused of using political power, cash handouts and news media repression to try to keep accusations about 1Malaysia Development Berhad muzzled for years.
Prime Minister Mahathir Mohamad campaigned ahead of the May election on bringing Najib to justice, and Najib and his wife, Rosmah Mansor, were prevented from leaving the country.
Jailed former PetroSaudi employee Xavier Andre Justo said the arrest was overdue and satisfying.
“This is a moment to savour for me and my family, because we had paid a high price for revealing the scandal,” he posted on Facebook.
“We will only rest when all his colleagues are jailed. There is actually still a lot of work that needs to be done.
“When all the criminals are arrested and Malaysia fully recovers, we will celebrate.”
Justo said PetroSaudi chiefs Tarek Obaid and Patrick Mahony stole US$500 million of public funds although neither were jailed.
“It’s high time for all these criminals to be put in jail. I suffered 18 months in prison for disclosing the crime. I hope they will spend a much longer time in jail.
“Besides, I also feel honoured to be able to assist in investigating the case. This is a good day to celebrate indeed,” Justo said.
Yesterday the anti-corruption agency questioned Riza Aziz, Najib’s stepson and a Hollywood film producer, about his role in 1MDB. US investigators say his company, Red Granite Pictures, used money stolen from 1MDB to finance Hollywood films, including Martin Scorsese’s Wolf of Wall Street.
Red Granite in March agreed to pay the US authorities US$60 million to settle claims that it benefited from 1MDB assets.
The civil suit against Red Granite was part of an effort to recover some of the $4.5 billion that US prosecutors say was stolen from the sovereign wealth fund. They say hundreds of millions from 1MDB ended up in Najib’s personal bank accounts.