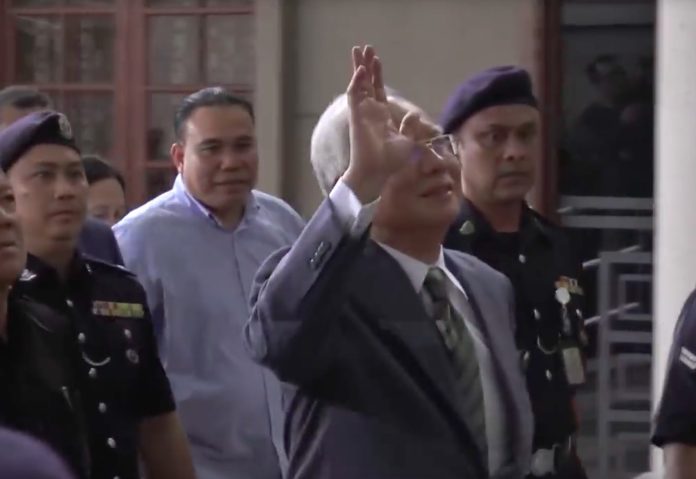 The charges are connected to the transfer of RM42 million (US$10.3 million) from SRC International, a subsidiary of 1MDB, to Najib’s personal bank accounts.

The charges come a month after Najib was charged with three counts of criminal breach of trust and one charge of abuse of power.

Najib denies the charges, telling Malaysiakini in June that his trial would be a “test” for the Malaysian judiciary. “I believe in my innocence. Therefore the only way I can clear my name is through a system that is fair and a system that is predicated on the rule of law,” Najib said. “Everybody [should have] a chance to prove themselves under the system.”

Raids have been carried out at properties linked to Najib and his wife Rosmah Mansor.

Police say the seizure of valuables, including handbags, jewellery and cash, was the biggest in Malaysian history.

1MDB, set up by Najib in 2009, was meant to turn Kuala Lumpur into a financial hub and boost the economy through strategic investments.

In early 2015 it missed payments for some of the US$11 billion it owed to banks and bondholders.

Then the Wall Street Journal reported on a paper trail that allegedly traced close to US$700 million from the fund to Najib’s personal accounts.

Malaysia has closed a Saudi-backed anti-terrorism centre, just over a year after it was launched by the West Asian monarch during a visit.

Malaysian Defence Minister Mohamad Sabu told MPs the King Salman Centre for International Peace would close and that its function would be absorbed by the Malaysian Institute of Defence and Security.

He did not give a reason for the decision.

The centre, which aimed to draw Islamic scholars to combat extremist views and promote tolerance, was announced in March 2017 during King Salman’s visit under Najib. It has a temporary office in Kuala Lumpur while awaiting the construction of a permanent building in Putrajaya, the seat of government.

Opposition MP Hishammuddin Hussein, who was formerly defence minister, said closing the centre was a loss to the nation amid growing terrorism in the Muslim world.

He said the centre was aimed at putting predominantly Muslim Malaysia at the front of the fight against extremism and ideologies in partnership with Saudi Arabia.

There had been concerns in recent years that under Najib, Saudi Arabia’s ultraconservative interpretation of Islam has gained a foothold in Malaysia.

Saudi cash has built mosques and schools across the region and offers scholarships to Malaysians and other Asean Muslims who want to study in the home of Islam.