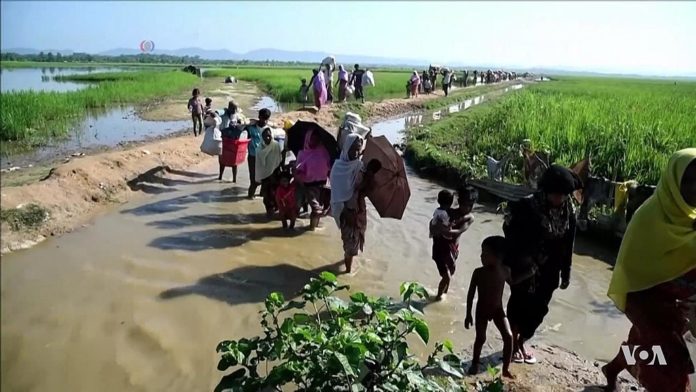 Every statement that comes out of Myanmar about the alleged Rohingya genocide in 2017 refers to the threat of the Arakan Rohingya Salvation Army (Arsa).
The country is being taken to the International Court of Justice (ICJ) by the Gambia over allegations that it committed genocide against the Muslim community in Rakhine State in August 2017.
The United Nations investigators say the operations that drove around 730,000 Rohingya out of Rakhine State had “genocidal intent”.
In response, Myanmar always refers to Arsa’s multiple coordinated strikes against police and army outposts along the border with Bangladesh in August 2017.
Unlike other armed groups in Myanmar, Arsa is referred to as a terrorist organisation, unworthy of being engaged in talks or invited to State Counsellor Aung San Suu Kyi’s ongoing Panglong peace conferences.
Last month the authorities declared that it had successfully seized three Arsa “terrorists” alive along the Bangladeshi border.
Two militants were reportedly killed and two others escaped. The Naypyitaw government released pictures of the seized arms and “bomb-making” equipment.
The picture of the arms stash would fail to threaten anyone. The seizure included two dilapidated shotguns, five assorted shotgun cartridges and assorted bags of agricultural goods.
Unsurprisingly, no Burmese soldiers were injured in the incident.
This “battle” appeared more like an excuse to arrest or kill Muslim farmers than response to a genuine military threat. And it was the “first strike” by Arsa reported by Myanmar’s military since January this year when the police and a military engineering unit said they were attacked near the border.
Contrast this with the rocket launchers and surface-to-missiles the Burmese military said it seized from the formidable Ta’ang National Liberation Army (TNLA) on the other side of the country in northern Shan State.
The seizure included Chinese-made FN6 anti-aircraft launchers, which cost US$70,000-90,000 each.
Myanmar’s military also reported seizing more than 40,000 rounds of ammunition.
The TNLA controls large areas along the Chinese border and has so far refused to sign a peace deal with the Naypyitaw government. It is one of the four members of the powerful Northern Alliance that denies the government access to huge areas of northern Myanmar.
The military said the seizure included 39 M-22 assault rifles, 29 medium machine guns, 69 M-21 assault rifles, nine M-16 assault rifles, 16 RPG-7s and one FN-6 shoulder-fired surface-to-air missile, plus 77 bags of TNLA uniforms, flags and military equipment.
The rebel armies throughout Myanmar’s border regions when combined outnumber the Tatmadaw, as the government forces are known.
The TNLA is a professional army with large numbers of well-equipped troops controlling territory.
By comparison, the Arsa appears to be near-fictional.
It was not noticed at the time but Arsa’s reported attacks on the border outposts occurred the day after former UN secretary-general Kofi Annan released his report into the Rakhine State crisis on August 24, 2017.
The study was critical of the Naypyitaw government and the military but it was instantly buried in the news of the Arsa attacks.
It was the most foolish time for any Rohingya group to launch an attack and hugely advantageous for Myanmar’s military.
If the shadowy Arsa did launch attacks on August 25, 2017, the group could have not chosen a worse day.
Next week Suu Kyi is going to The Hague in the Netherlands to defend the military’s role in Rakhine State.
Under the military-drafted 2008 Constitution, the generals maintain control of the ministries of home affairs, defence and border security, so the democratically elected Suu Kyi has little or no influence over the troops’ operations in Rakhine State.
But still, she has volunteered to represent the generals in the global court in her capacity as foreign affairs minister.
Judging by the generals’ repeated claim that the troops were battling an Arsa-led insurgency, it would appear likely that her presentation to the ICJ will be exceedingly weak and she will suffer another humiliation at the hands of the international community.
A general election is due in Myanmar next year and her popularity will not be weakened by international condemnation.
However, Suu Kyi could simply tell the truth without incriminating herself.
She could explain that the generals maintain almost complete control of Rakhine operations and her National League for Democracy government has no check on their actions.
Maung Saung Kha, a human rights activist in Myanmar, told the Irrawaddy: “Rather than denying human rights abuses at the ICJ, I want her to explain the causes and effects, the situation on the ground and limitations imposed by the 2008 constitution.
“I want her to explain why human rights abuses took place and ask for help to prevent such things from recurring. I believe the defence of the prosecution will bring justice for those whose rights were abused.”
Unfortunately, there is nothing in her previous behaviour to suggest Suu Kyi will break ranks with the generals.
Instead, Myanmar will continue to blame others for its failure to establish a peaceful, prosperous democracy since holding a democratic election in 2015. Rather than blaming Arsa and the international community, the people of Myanmar should look to those responsible for their woes: the generals.
Not terrorists: Rohingya civilians flee Rakhine State in 2017. Picture credit: Wikimedia