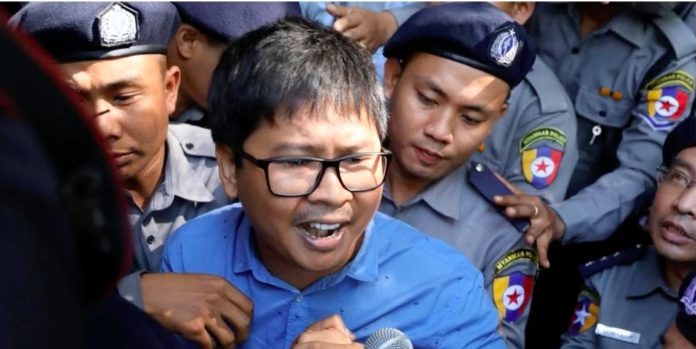 Two Reuters journalists jailed in Myanmar for reporting on the Rohingya murders carried out by Burmese soldiers have been freed on a presidential amnesty.

Wa Lone, 33, and Kyaw Soe Oo, 29, who spent more than 500 days behind bars, were convicted under the colonial-era Official Secrets Act and sentenced to seven years in prison last September.

Wa Lone (pictured) said he would continue reporting and was keen to return to the news agency.

“I’m really happy and excited to see my family and my colleagues. I can’t wait to go to my newsroom,” he told the media after being released.

Wa Lone’s wife, Pan Ei Mon, discovered she was pregnant after her husband’s arrest and he has only met his daughter during prison visits.

Thousands of other prisoners were also freed in a mass amnesty for Thingyan, the Burmese new year.

State Counsellor Aung San Su Kyi, herself a former political prisoner, was internationally criticised for defending the jailing of the journalists, saying they “broke the law”.

Her supposedly democratic government watched the pair languish in jail for 18 months.

The reporters were collecting evidence about the murders of 10 Rohingya-Muslim boys and men by soldiers in the village of Inn Din in northern Rakhine State in September 2017.

They were arrested before they published their report, after being handed documents by two police officers who they had met at a restaurant.

A police captain testified during the trial that the restaurant meeting was a set-up to entrap the journalists. The excessively honest officer was promptly jailed and his family was evicted from their police-owned lodgings.

The reporters were represented in court by prominent rights lawyer Amal Clooney.

“It has been an honour to represent Reuters and the two journalists in this case and I hope that their release signals a renewed commitment to press freedom in Myanmar,” the movie star’s wife said.

Amnesty International’s Alex Neve praised the pair’s release but said there was much else to do.

“It comes at a time when press freedom is very much under attack…In many countries, there’s been a significant crackdown against journalists. There’s a lot of vilification and derision of journalism as a profession, the whole world of fake news for instance.

“It really is important that we remind ourselves of the crucial role that journalists play in so many respects…an absolutely essential part of the struggle to uphold human rights.”

Wa Lone. The pair were held in jail for 18 months before the National League for Democracy government granted an amnesty. Picture credit: YouTube