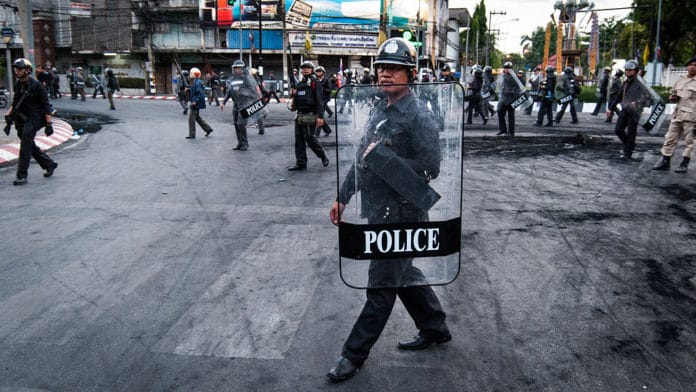 The Thai authorities have a long history of human rights abuses. Source: Wikimedia

Thailand has dumped legislation to criminalise torture and disappearances after years of supposedly preparing for the bill, the UN human rights office said, leaving alleged torturers unaccountable for serious crimes.

Torture is not a criminal offence in Thailand and although victims have won compensation, perpetrators cannot be prosecuted, UN rights specialist Ravina Shamdasani said in Geneva.

“Clearly this is not an acceptable state of affairs for such serious human rights violations,” she said. The military-appointed parliament had shelved the legislation last week, she added.

The lack of any law on disappearances means security officers who abduct and kill people or secretly send them to a third country may never face justice.

“What ends up happening is where you don’t find a dead body or where, after a certain amount of time you don’t have enough evidence, they just close the case,” Shamdasani said in Geneva.

“The decision not to enact the bill is also a devastating blow to the families of those who have disappeared. They have the right to know the truth.”

A UN study recorded 82 disappearances in Thailand since 1980, including that of lawyer Somchai Neelapaijit in 2004 and Pholachi Rakchongcharoen, a rights campaigner from the Karen minority, in 2014.

There were also an increasing number of criminal cases being brought against people who reported allegations of torture, she said.

In more murky news from the kingdom, a senior adviser to Thailand’s to King Maha Vajiralongkorn has been sacked, the second such dismissal in recent weeks.

Members of Vajiralongkorn’s inner circle have been fired or jailed in recent years, including two who died in military custody.

Jumpol Manmai, a former deputy police commissioner and palace Grand Chamberlain, was the most recent casualty.

The Royal Household Bureau said Jumpol was fired for trying to improperly profit from his royal connections and establish political influence.

“He abused his position to gain personal and political benefits which jeopardises security.”

Although cloaked in secrecy, such cases spark great gossip and speculation in Thailand.

The royal family is protected by the world’s strictest lese majeste or defamation law that makes scrutiny of its inner workings or role almost impossible within the kingdom.

In 2015 three people, including a soothsayer, we detained under lese majeste for trying to profit from royal connections.

The soothsayer and another suspect died in military custody soon after being arrested.

In 2014, Vajiralongkorn announced that his then wife, Princess Srirasmi Suwadee, with whom he has a son, had been stripped of her royal titles.

Six members of Srirasmi’s family were jailed on lese majeste charges for allegedly improperly using their connections to him.