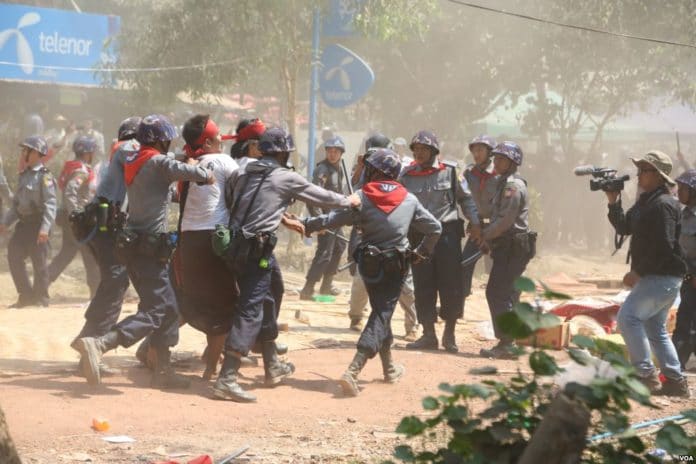 The United States has for the first time called Myanmar’s attacks against Rohingya Muslims in Rakhine State “ethnic cleansing”, saying targeted sanctions against those responsible are under consideration.

More than 600,000 Rohingya have fled to neighbouring Bangladesh since violence broke out on August 25 in response to reported attacks on police outposts by Muslim militants.

Secretary of State Rex Tillerson, just back from a visit Myanmar, said: “These abuses by some among the Burmese military, security forces and local vigilantes have caused tremendous suffering and forced hundreds of thousands of men, women and children to flee their homes in Burma to seek refuge in Bangladesh.

“Those responsible for these atrocities must be held accountable,” he said, while calling for an independent investigation.

The term does not have any legal standing and most commentators have fallen short of using the word “genocide”.

Earlier this month, the military or “Tatmadaw” published an internal investigation exonerating itself from blame for the crisis.

It said “Bengali terrorists” were responsible for burning houses and that those who crossed the border into Bangladesh did so because they feared those terrorists.

In Myanmar, many residents hide behind excuses that the Rohingya brought the crisis on themselves and, illogically, that they wilfully burned down their own homes.

The Rohingya are commonly referred to as Bengalis in Myanmar to imply they are illegal immigrants from Bangladesh. In response, many Rohingya claim to have descended from Arab traders who crossed the Indian Ocean a millennium ago. The truth is probably that the community has a varied heritage, largely dating back to the British colonial era.

China is trying to establish bilateral talks between Nay Pyi Taw and Dhaka to address the civilian crisis.

And Pope Francis is due to arrive in Myanmar on November 26 and hold meetings with the country’s most powerful figure, commander-in-chief Min Aung Hlaing, and Suu Kyi, according to the Vatican.

The pontiff is also due to visit Dhaka to meet Rohingya refugees.

But foreign pressure will have limited impact without a change in attitude among Myanmar’s leaders.

Unfortunately talk of repatriating the Rohingya is likely to result in no more than a few photo opportunities of a handful of returnees, while the vast majority of those displaced are forced to fester in wretched camps in Bangladesh.

Public opinion in Myanmar, bolstered by numerous bogus newspaper editorials, is firmly opposed to allowing the return of “Bengali terrorists”.

Attitudes will not change until political leaders are prepared to change the narrative.

While Suu Kyi refuses to jeopardise her electoral support by conceding that colossal mistakes have been made since she took office in April 2016, there will be no appetite to address the crisis in any way that appeases international anger.

Suu Kyi’s inability to stand up for what’s right was evident long before she came to power.

In Letpadan Township on March 10, 2015, a large group of students were resting during a march on Yangon to protest against the centralising National Education Law. The authorities moved in and savagely beat the students (pictured), incarcerating hundreds who reported torture and deprivation. Many were held for over a year.

During the episode, Suu Kyi, then the opposition leader, remained silent, presumably unwilling to jeopardise her fragile relationship with the military.

While the students — symbolic of the hope for the nation’s future — suffered appallingly in prison for conducting a peaceful protest, Suu Kyi continued making bland speeches without mentioning their plight.

Her platitude-laden pronouncements were full of calls for peace and a change of mindset, while ignoring the fact that innocent students were being tortured in the nation’s jails.

The National League for Democracy (NLD) government’s failure to reform the economy has also been a colossal disappointment.

But structural economic reform would require confrontation with the generals and their cronies and no one in the NLD appears to have any stomach for the fight.

Suu Kyi’s government has been filled with yes-men who cannot act without her permission: the finance minister even has a fake degree.

Again the warning signs were there before Suu Kyi came to office.

One example was the disappearance from the political stage of Nyo Nyo Thinn, who had gained a reputation as an effective, independent Yangon regional MP.

She stood out as a challenging voice to Yangon’s quasi-civilian government before the NLD took control in 2016, consistently asking difficult questions of the secretive authorities.

She was set to run for the NLD in the 2015 election but was displaced by another candidate who lacked her education and political skills.

Did Suu Kyi feel threatened by the younger Nyo Nyo Thinn who was holding the Yangon government to account in a way that the Nobel laureate failed to do in the union parliament?

Suu Kyi also appears to have been responsible for rejecting the candidacy of Ko Ko Gyi, a leader from the 1988 student uprising, who had the skills to potentially overshadow her.

He had planned to run for the NLD in 2015 but, to the surprise of many, his name was omitted from the party’s candidate list.

Looking at the weak compromises made by Suu Kyi in the last few years, there appears a consistent pattern: the desire to win and retain office. Now all she has achieved is an enfeebled position, where she is blamed for the military’s actions but powerless to control them.

It is hard to think of another career since Marshal Petain of Vichy France that has fallen so fast. But the signs were already there to see in 2015 for those who cared to look.

The 2015 Letpadan crackdown on the student protesters. Picture credit: Wikimedia