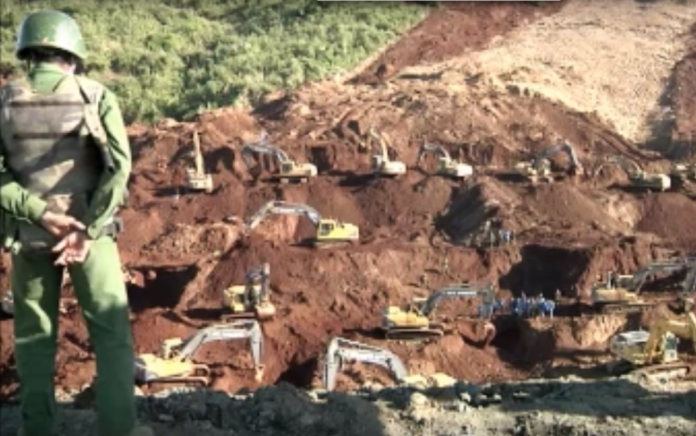 Myanmar gem bosses have called for a probe into the disappearance of around US$100 million, including US$1.1 million allegedly taken by former president Thein Sein.

Kyaw Kyaw Oo, an executive member of the Myanmar Gems and Jewellery Entrepreneurs Association, told the media in Yangon that the government should take action against the previous administration for alleged embezzlement.

The fund, opened under Thein Sein’s rule from 2011, reportedly contained about US$104 million from fees paid by the notorious tycoons running the extraction industry.

Former minister of mines Myint Aung, who was appointed in 2012, told the media in Nay Pyi Taw that the missing money had been properly spent and accounted for.

“In the complaint letter there are accusations that the money went missing because of graft. There was no graft.”

He admitted that €12 million from the account were allocated to projects under Thein Sein’s management but explained that the gems bosses approved these initiatives as corporate social responsibility projects.

“Now we can clear up everything,” he announced. “We didn’t have any corruption here. What we had done was decided by the [government’s] Central Executive Committee, not by a single individual, and it was carried out according to working protocol.”

Myanmar’s jade industry was valued at US$31 billion by NGO Global Witness.

Win Htein, director general of the Department of Mines, told the media that the fund was now worth less than US$8 million.

“First we heard €7 million [US$7.8 million] from the fund was given to the former president,” Kyaw Kyaw Oo told the press conference. “So we raised the issue with retired colonel Win Htein, who is now presiding over an inquiry committee. He said that only €1 million was given to Thein Sein. It’s on a recording.”

The money was distributed to development funds, Myint Aung said.

He added that he was seeking legal action over the accusations, the state-run Global New Light of Myanmar reported.

Gem association members have signed a petition urging Shwe Mann, the former military chief and parliamentary speaker, to launch a probe with the Legal Affairs and Special Cases Assessment Commission that he chairs.

“This is a problem within the jewellery organisation where many of the complainers are Central Executive Committee members,” he said.

“The complaint should have gone to administrative authorities of the government led by President Htin Kyaw, the parliamentary committee which oversees mining, or the complaints and appeals committee. But instead, the [association] sent the complaint to parliament’s special commission led by many ousted USDP [which ran the previous government] leaders,” he continued.

“This raises questions as to whether the reason behind the move might be a political one that runs deeper than organisation’s internal affairs,” he said.