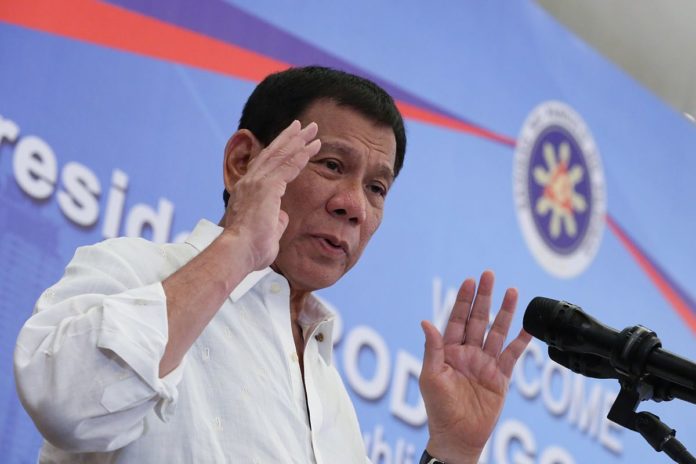 Duterte said in an April 26 speech that he would “go to war” if any other country claimed the maritime feature.

Chinese survey ships were spotted in the area two months ago.

More than 300 hectares of the 13-million hectare area is due to be designated as a special fisheries management zone.

Duterte also deployed a team of around 50 Filipino researchers to study the resource-rich area. They will map the area, conduct biological investigations and assess the coral reef and fisheries until November.

The United Nations has recognised the rise as part of Manila’s extended continental shelf over which the Philippines has sovereign rights.

Duterte’s visit marks the first anniversary of the renaming of the feature from Benham Rise, named after US geologist Andrew Benham who discovered it in 1933, to Philippine Rise, asserting Manila’s sovereign rights over the contested area.

“Philippine Rise is ours. I did not make any distinction between sovereign rights and sovereign property, sinabi ko lang sa’tin ‘yan [I just said ‘that’s ours’],” Duterte told the media.

His son Sebastian and senior aide Christopher “Bong” Go also boarded jet skis off the coast of Aurora. The original plan was for Duterte to ride a jet ski, but the presidential security chief Lope Dagoy said the 73-year-old was advised against it.

“We advised him against it because it was too hot. It was not good for his health,” Dagoy told the media.

During the campaign for the 2016 presidential election, Duterte promised to ride a jet ski to the Spratly islands in the South China Sea to plant a Philippine flag and face down Chinese expansionism.

Since taking office, Duterte has been far more diplomatic about China, to the detriment of the archipelago’s long-standing relationship with Washington.