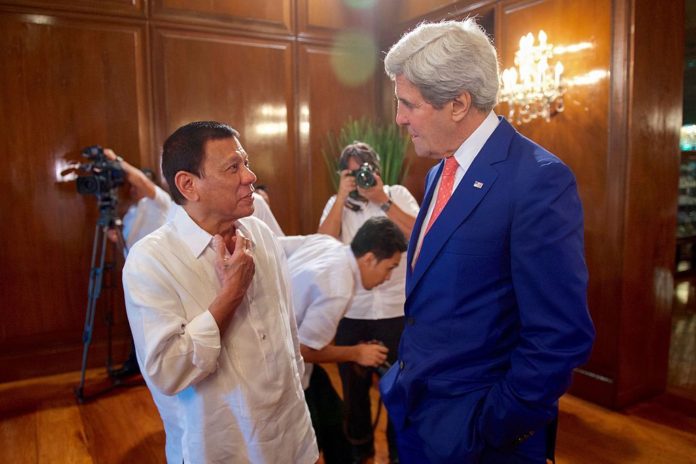 A Philippine parliamentarian has filed an impeachment complaint against President Rodrigo Duterte, accusing him of murder and crimes against humanity during his drugs crackdown.

Duterte’s allies dominate the House of Representatives in Manila meaning there is little chance that the opposition initiative will be successful but it could allegedly open the door for charges against the bombastic president at the International Criminal Court.

Showing that domestic attempts to stop Duterte’s anti-drugs campaign had failed would allow international judicial authorities to take up the case, human rights lawyers have argued.

“It is high time that President Duterte is punished for his sins against the country,” Representative Gary Alejano said as he filed the complaint. “We are of the firm belief that he is unfit to hold the highest office of the land and that impeachment is the legal and constitutional remedy to this situation.”

However, the impeachment “will not fly”, said Solicitor General Jose Calida, who called Alejano a “puppet” of Duterte opponent Senator Antonio Trilanes, according to the Inquirer.

Calida was quoted saying by the paper: “I urge you to treat this impeachment as a desperate attempt of spoiled grown-up brats to destabilise our country. They will not succeed.

“Representative Alejano is a toady of his braggart patron, Senator Trillanes. They are not even in the league of Don Quixote so this impeachment won’t fly. It will crash like a rudderless plane flown by witless pilots,” Calida added using language that characterises Filipino political discourse.

Thousands of alleged drug users and dealers have been slaughtered by the police or vigilante gangs since Duterte took office last June. Witnesses say the killings have been committed crimes in cold blood, despite police claims of self-defence.

Alejano’s accused Duterte of implemented a state policy that encouraged murder in the name of fighting drugs. The opposition politician also said the former Davao mayor ran a death squad before becoming president. Two self-confessed hit men testified that they belonged to such a Davao death squad overseen by Duterte while he was mayor.

Alejano said Duterte maintained thousands of fictitious employees in Davao in order to collect their salaries and amassed up to US$40 million in undeclared bank accounts, echoing a charge made the opposition’s Trillanes.

A third of the lower house must support an impeachment motion for the case to go to the Senate for trial, and with more than 260 of the house’s 292 representative allied with Duterte, there is little chance of that happening. House Speaker Pantaleon Alvarez, a Duterte ally, dismissed the allegations as “fabricated”.