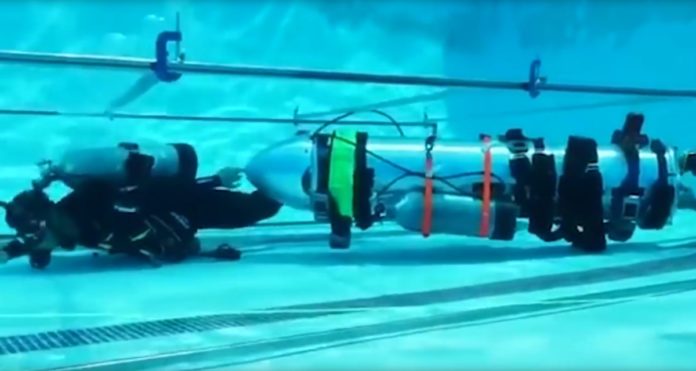 A British dive hero, who was instrumental in rescuing the football team trapped in a cave in northern Thailand, has sued Tesla boss Elon Musk over a series of outrageous tweets and emails accusing him of being a paedophile and child rapist.

Vernon Unsworth, 63, who spends much of his time in Thailand, is suing Musk, who tweeted multiple falsehoods after the unlikely rescue of the boys and their coach in July.

The lawsuit filed in the Los Angeles federal court seeks more than US$75,000 in damages and a court order preventing the outspoken tycoon from making further remarks.

The sum is unlikely to make a major dent in the billionaire’s assets.

Unsworth’s legal team has reserved the right to bring a similar action in the UK.

Musk, 47, called Unsworth a “pedo” in a tweet to his 22.5 million followers after the diver was critical of a submarine (pictured) made by Musk’s team in a July 13 interview with CNN.

Musk demonstrated his low emotional intelligence with the tweet: “Sorry pedo guy, you really did ask for it” and then added, “Bet ya a signed dollar it’s true.”

After his initial outburst, Musk even taunted Unsworth on August 28, tweeting: “You don’t think it’s strange he hasn’t sued me? He was offered free legal services.”

The legal papers also refer to remarks by Musk, reported by Buzzfeed, including that Unsworth had moved to Thailand “for a child bride” and that the news agency should “stop defending child rapists”.

“He’s an old, single white guy from England who’s been travelling or living in Thailand for 30 to 40 years,” Musk wrote, adding that the diver moved to the kingdom “for a child bride who was about 12 years old at the time”, according to the lawsuit.

In a second email to BuzzFeed, Musk said Unsworth, who risked his life to save the football team, was a liar who was not on the cave dive team.

The documents claim the allegations are false.

A small submarine was specially built to help with the rescue but anyone who had followed the rescue mission knew the holes were far too small for a solid structure.

Unsworth dismissed the sub as a “PR stunt” and said the billionaire should “stick his submarine somewhere where it hurts”.

The legal documents say Musk then began “publishing false and heinous accusations of criminality against him to the public”.