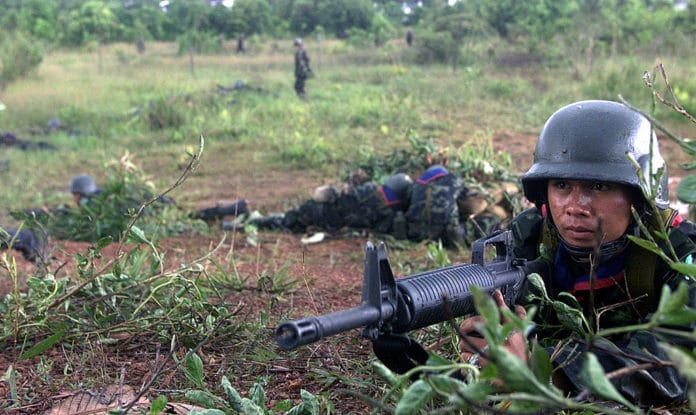 The Thai military is repeatedly engaged in Thailand.

Thailand’s unstable southern provinces were rocked by a wave of bomb blasts and arson the day after the kingdom enacted its new constitution.

The 23 incidents, including arson and five small bombs, caused widespread blackouts in four southern provinces but no casualties were reported.

The new constitution was overwhelmingly rejected by the three border provinces of Pattani, Yala and Narathiwat during the ratification process last August. Several attacks also occurred in the neighbouring province of Songkhla.

The new constitution is set to cut the power of parliament but boost the army’s role although the junta led by former general Prime Minister Prayut Chan-o-cha is due to step down after elections promised late in 2018.

Although a previous draft of the constitution was approved in a nationwide referendum last year, the copy that King Maha Vajiralongkorn, 64, signed into law has not been seen by the public.

The new monarch made a rare intervention into politics in January to request constitutional changes relating to his powers.

Prayuth said the changes had “nothing to do with the rights and freedom of the people”.

One change is allegedly to allow the king, who spends much of his time in Germany, to travel abroad without appointing a regent to rule in his absence.

The edited constitution will not be published until it appears in the Royal Gazette when it becomes law.

On the southern attacks, security analyst Don Pathan told the Straits Times: “The whole idea is to humiliate the Thai security apparatus. Right now, their aim is to make the area ungovernable as much as possible.”

Last month 13 people were killed in the south.

“The incidents are to create disturbances. They want to destroy the government’s credibility and create fear among people,” said Pramote Prom-in, a Thai security forces spokesman.

Last Monday, men with grenade launchers and other weapons attacked a police checkpoint in Yala, injuring six officers. Three other attacks last week killed a soldier and a police officer.

In 2004 violence broke out in the southern provinces as Malay Muslim rebels battled the Thai troops for greater autonomy in response to a government crackdown.

The fighting has claimed more than 6,500 lives since 2004, according to the Deep South Watch monitoring NGO.

Police said the two men in a pickup truck tried to escape a checkpoint and began shooting at security officers, who returned fire. They also said the two men were responsible for an attack last month that killed an eight-year-old boy and three relatives.