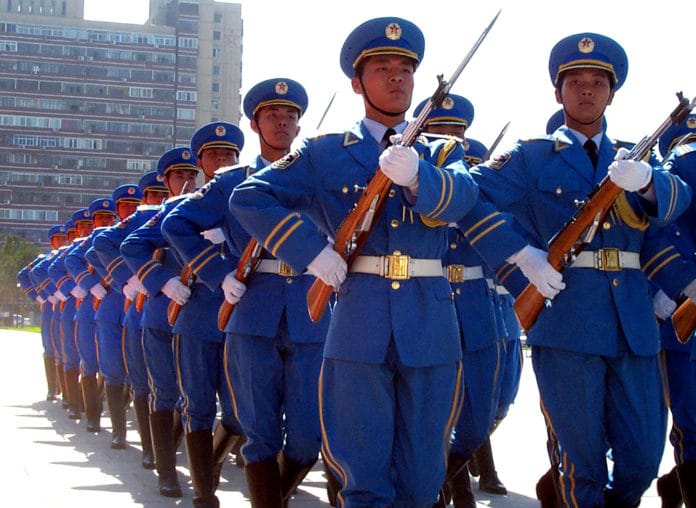 The Chinese armed forces will have noticed the waning US influence in Asean. Source: Wikimedia

One of the bitter realisations on November 8 was that Donald Trump was not going away. Many of us had hoped that he would disappear back to reality television.

But his slim victory in a few swing states has meant that commentators will have to spend his administration, as long as it lasts, debating what is going on in the soft tissue between his ears. The Asean Economist suspects the answer is “not much”.

Listening to his statements, which are more akin to a word puzzle than the considered responses of the next leader of the free world, can lead to some contradictory conclusions. Trump appears just as likely to start a war or open trade deals with states like Iran and China.

But from an Asean point of view, there are some fairly watertight conclusions that we can draw.

For all those democratic campaigners struggling against Asean’s authoritarian and quasi-democratic regimes, we can assume that the cavalry is no longer coming. Trump is not going to exert any pressure defending human right activists in distant shores.

Trump’s arrival is merely a catalyst for an ongoing process that will probably define Asean’s century: the increasing dominance of China.

Outgoing President Barack Obama invested greatly in his so-called “pivot to Asia”, reflecting his own west-coast roots and a reorientation away from European concerns. But the policy has palpably failed. During his time in office, a pro-American, democratic government has been toppled in Thailand by a military that is now looking to China for training and equipment.

The nationalist Rodrigo Duterte has taken over the presidency in the Philippines and made his contempt for Washington quite evident. His anti-Americanism appears to be rooted in the archipelago’s colonial subjugation and a youth spent under the shadow of the disastrous Vietnam War. In his first few weeks in office, Duterte managed to call Obama a “son of a whore” and then hide from him at the Asean summit in Laos, only to subsequently visit Beijing on his best behaviour.

Duterte appears have noticed the wind is blowing from Beijing and the US is yesterday’s power.

Even this week Cambodia announced that it was cancelling joint military operations with the US.

General Chhum Socheat of Phnom Penh’s ministry of defence said: “We have never had any problem with the US”, demonstrating striking historical amnesia.

These processes would no doubt have continued under a Hillary Clinton presidency.

Trump’s choice for secretary of state has been talking tough but will his boss really have the appetite to back up the words?

“We’re going to have to send China a clear signal that first, the island-building stops, and second, your access to those islands also is not going to be allowed,” former Exxon Mobil CEO Rex Tillerson said during his Senate confirmation hearing. He compared China’s island-building in the South China Sea to Russia’s annexation of Crimea.

It is hard to see how this tough stance could represent Trump’s intentions.

And he is even less likely to be prepared to get militarily involved in the South China Sea.

Trump’s stream of tweets and statements about Taiwan endanger the delicate balancing act Washington has negotiated over the nationalist island since the 1970s. Rather than hinting at some strategy to break the deadlock on the Taiwan issue, Trump’s pronouncements on the subject scream ignorance and limited powers of concentration. Anyone who thinks a barrage of tweets is the way to communicate with the Chinese clearly does not think very much.

A new era of undiluted Chinese dominance in Asean has uncomfortable historical echoes.

China already enjoys heavy influence over Cambodia and has persuaded Phnom Penh to block several efforts to establish an Asean-wide policy on the South China Sea.

Unchecked Chinese dominance in Cambodia is nothing new. Pol Pot’s Khmer Rouge was almost completely dependent on Beijing as its only ally during its barbarous years in power from 1975 to 1975. The Chinese Communist regime has never been held accountable for supplying and training its blood-thirsty client state behind closed doors.

In the 1970s, Mao Zedong wanted a client state in the developing world to match the Cold War influence of the Washington and the Moscow. He settled on Cambodia. “To regard itself as rising power, China needed that type of accessory,” Andrew Mertha, author of Brothers in Arms: China’s Aid to the Khmer Rouge, 1975-1979 told the New York Times.

Mertha, a Asia-Pacific scholar at Cornell University, said China provided at least 90 per cent of the foreign aid given to the Khmer Rouge, including food, construction equipment, tanks, planes and artillery. Chinese engineers and military advisers continued to train the Khmer Rouge as they killed up to 2 million citizens.

“Without China’s assistance, the Khmer Rouge regime would not have lasted a week,” Mertha said.

While China has changed since Mao died and is now more associated with exports of consumer goods than genocide, do not expect the Chinese to prioritise the rights of Asean’s dissidents.

The overriding message from Trump’s arrival in the Oval Office is that activists must not hope for US assistance. Thai political activists arrested for exchanging private messages on Facebook, Rohingya Muslims burned from their homes by Myanmar’s military or Cambodian opposition politicians challenging Prime Minister Hun Sen’s three decades in power at next year’s election need not trouble to petition the US for assistance.

Many will look at the US legacy in Vietnam, Cambodia, Laos and Indonesia, where Washington turned a blind eye to the butchering of millions of alleged communists between 1965 and 1966, and conclude a reduced US role is nothing to mourn.