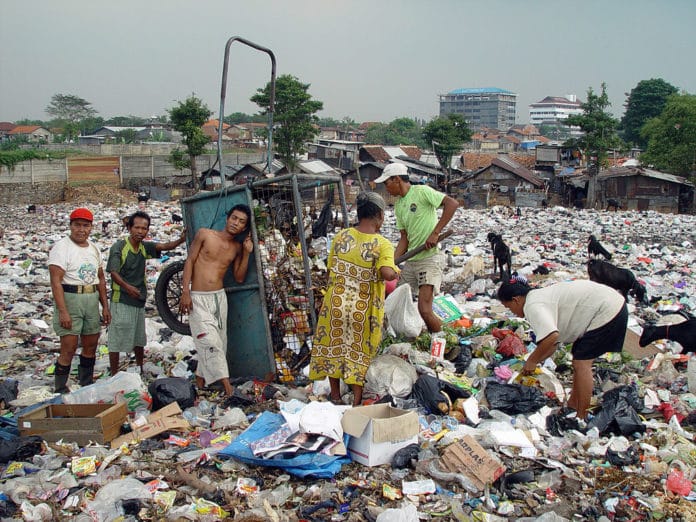 The Indonesian military has been deployed to unblock rivers and canals clogged with bottles, bags and other plastic packaging.

Indonesia is estimated to be the second-largest emitter of plastic waste into the oceans after China and is discussing plastic taxes.

The plastics industry in Indonesia says the central problem is not plastic, but that the government has not set up effective waste management.

In West Java, the army says the waste accumulates as quickly as it is cleared with a commander in Bandung calling it “our biggest enemy”.

A population surge has combined with the spread of plastic replacing biodegradable packaging such as banana leaves while the authorities fail to cope with the demands on rubbish collection.

A habit of throwing rubbish into ditches and streams also needs to be addressed.

Dr Anang Sudarna, who leads the West Java Environmental Protection Agency, told the BBC that the issue was “impossible to sort out without the highest authority”.

“I am angry, I am sad, I am trying to think how best to solve this… the most difficult thing is the people’s attitude and the political will.”

Indonesia’s Achmad Solikhin this week won a United Nations award for his invention, Biotic, a plastic made from recycled and bio-based plastic. Using lignocellulose and nano-particles, his plastic combines secondary plastic from recycling centres with bioplastic from any kind of agriculture waste with cellulose like rice crops. Achmad then adds bio-based nano-materials to make the plastic durable for use in products like helmets with the intention to make compostable packaging and furniture in the future.

On the ground, however, recycling is less glamorous.

To encourage recycling, the Bandung authorities are supporting initiatives in “eco-villages” where plastic waste is exchanged for cash.

Plastic must be laboriously divided into different types with bottles cut apart into different polymers although there is little apparent public interest in recycling.

At Bandung’s only landfill site, which only receives a tiny fraction of the waste the sprawling city produces, around 500 “scavengers” search for plastic products.

“If we educate the student, when they go outside the school and the ecosystem is still broken and people are littering everywhere, they are confused so it needs both sides, education and also law enforcement by society.”