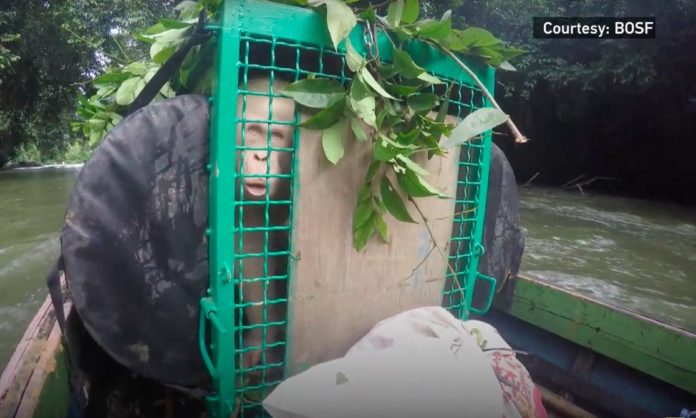 The only known albino orangutan, Alba, (pictured) has been released into a protected forest more than a year after being found close to death in an Indonesian village.

The blue-eyed, white-haired ape was “very strong” after care from the Borneo Orangutan Survival Foundation (BOSF) on her release into Bukit Baka Bukit Raya National Park. She was found caged and weighing 8kg in April last year.

Her albinism means she has poor eyesight and hearing and a higher risk of skin cancer.

“It’s true this is a big gamble but we hope that with our collaboration we will win the big bet we have made today,” said BOSF CEO Jamartin Sihite after releasing Alba.

An estimated 150,000 orangutans, which translates as “forest man” because of their similarity to hairless primates, have died because of a lost of habitat on Borneo in the last 16 years.

The International Union for Conservation of Nature said the population of orangutans on Borneo had fallen from about 288,500 in 1973 to an estimated 100,000.

The foundation said Alba thrived in her climbing and socialisation skills while in care and formed a special bond with Kika, another rescued female orangutan.

A team from the rehabilitation centre took Alba and Kika on a gruelling journey through the forest, including a four-hour boat ride, to reach a remote spot for their release.

“Alba has no inferiority complex as we imagined before. She is very confident compared to other orangutans,” said Indonesian vet Agus Fathoni.

“I think the real threat actually comes from humans. What we’re worried about is poaching, where this very special condition makes her a target.”

Kika and Alba’s release into the wild brings the number of orangutans freed by BOSF to 386.

Around 26 million Indonesians live below the poverty line, attracting many to poaching.

Orangutans fetch several hundred dollars in Borneo’s markets and skulls are valued at US$70, according to WWF. Baby orangutans are sold on the black market as pets while others hunted for their meat or killed as pests.

Alba’s journey back to her new home. Picture credit: YouTube