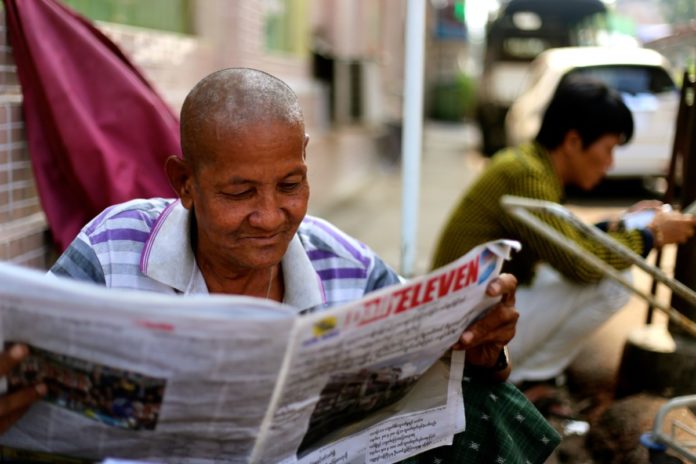 Three reporters in Myanmar facing jail for covering one of the many rebel armies opposing the government have accused the military of trying to silence the media.

Irrawaddy reporter Lawi Weng said the media was being “threatened” into silence as the three were remanded in custody for another week after a further court hearing.

The court hearing was unexpectedly brought forward by three days, meaning at least one lawyer was absent.

“I planned to go there on Friday, the scheduled date. I was not informed that the court date was moved,” Democratic Voice of Burma lawyer, Maung Maung Win, told Reuters.

“I am now in handcuffs because I am a journalist. Is this democracy?” he said outside the court in the northeastern town of Hsipaw, Shan State, holding up his chained wrists.

“We were detained as an attempt to compromise our beliefs and scare us. But we are not afraid.”

Fellow detainee Aye Naing of the Democratic Voice said: “This is a shame for Myanmar, which is shouting to the world that we are on the path to democracy.”

His colleague Pyae Phone Aung is the third reporter being held under the 1908 colonial-era Unlawful Associations Act, which carries a sentence of up to three years in prison.

Both publications involved were established in exile when Myanmar was under brutal junta rule.

They were arrested three weeks ago as they left a drugs-burning event organised by the insurgent Ta’ang National Liberation Army, which controls large areas along the Chinese border.

Three Ta’ang representatives are also being held with the journalists.

Aung San Suu Kyi’s National League for Democracy government is facing increasing international criticism for not stemming the growing number of prosecutions of journalists under her leadership.

Earlier this month Suu Kyi reportedly told a press conference that the case was a matter for the judiciary. However, the justice system is military-controlled under the 2008 Constitution, which was drafted by the generals.

Prosecutions under the controversial Section 66(d) of the Telecommunications Law have increased since Suu Kyi took power last year. Any citizen can use Section 66(d) to sue for alleged online abuse, regardless of whether they were the subject of the remarks. It carries a threat of three years in prison and suspects are normally refused bail, which is deeply controversial for alleged defamation, meaning it is often used to jail journalists and political activists during prolonged trials.